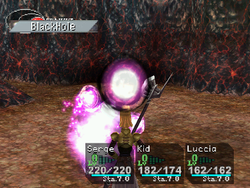 Peppor casts BlackHole on Solt, who demonstrates trapping the element.

BlackHole (ブラックホール, BlackHole?) is a 6th-level Black Element in Chrono Cross. When cast, it sucks everything in the area into a super-vacuum, doing large damage to all enemies. It can only be used by innate Black characters.

Before fighting the Fire Dragon on Mount Pyre, the Shaker Brothers demonstrate how to Trap Elements. The Element cast by Peppor in the demonstration is BlackHole, which they planned to use on Serge and exploit his White Innate quality. However, again, their plot is foiled by their own stupidity.

A dark sphere falls from the sky, which quickly transforms into a Black Hole that draws all enemies into it. As this happens, the screen becomes engulfed in darkness. A shining light then explodes, damaging all enemies on screen.

How to Obtain[edit | edit source]

The BlackHole (Trap) can be bought from Marbule in both worlds for 400 G and stolen from both forms of the Bunyip boss found in Fort Dragonia (Another World).

Black holes are cosmic phenomena with extreme gravitational pulls, the likes of which, no physical matter can resist. It is believed that all objects are pulled toward Black Holes, which disassembles the matter and arranges it into a particle-by-particle chain and swallows it into its center. The fate of the matter beyond this point is the subject of much speculation.