Recharge (アゲイン, agein?, "Again") is a 6th-level Red Element. It is a consumable element that, when used, will recover all of an individual ally's used elements (note it only "recharges" Elements allocated on levels 1 through 5 of the grid - it won't work on levels 6 - 8).

It can only be allocated to level 6 of the Element Grid.

There is only a single cluster of this element found in Chronopolis, which can be used up to five times. This is the only consumable element in the game which cannot be bought at a shop.

How to obtain[edit | edit source]

On the 2nd Floor of Chronopolis, first unlock the door next to the red laser beams by entering the left most door of this same floor and pressing the switch in the upper left corner (it looks like a keyboard). After this, enter the now unlocked door next to the red laser beams. In this room, there is a large safe door on the left with five slightly smaller safe doors to its right (there is also a coffin-like box to the right - open it with Grobyc in the party to receive his level 7 tech StrongArm).

This element is found within the left-most safe door, but it requires entering a key code of two numerals (Base 2 code where each succeeding number in sequence is doubled from the one before it); with the exact combination of numbers differing based on which doors are opened. The simplest way to get this element is to simply close the five smaller safe doors, and then enter the code number "00". This will unlock the larger safe's door, letting you receive this element. 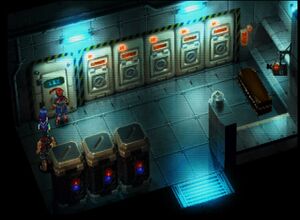 When in Chronopolis, head to the room pictured above and simply enter the numbers "00" while the doors to the right are closed (as seen in this image) and you will receive the Recharge element. This is the only area in the entire game where this element can be found.
Retrieved from "https://www.chronowiki.org/w/index.php?title=Recharge&oldid=51171"
Categories: