Fort Dragonia (古龍の砦, , Koryū no Toride, lit. Stronghold of the Ancient Dragons?) is a location in Chrono Cross. It is the ancient fort constructed by the Dragonians.

Intended for defense and rituals, it was constructed on a flat stone plain only accessible through Mount Pyre. From this huge floor, it rose several stories; the inside allowed access to four different puzzles that had to be completed to access the crowning room. The puzzles included setting a stone statue to face a certain direction, rotating two huge beams, sequencing three people in a certain order, and navigating a confusing maze. Once completed, an elevator to the basement and upper floor would emerge in the central area. The Dragonians did not have to complete the puzzles each time they wished to access the ritual room, as placing the Dragon Tear at the plaque in the front of the building would automatically unlock the elevator. In the basement, incubation pods existed to facilitate the hatching of Dragon eggs. The upper floor consisted of a room with circular paths whose center contained a teleportation device. When accessed, it propelled the user high above the Fort to reach a small, floating structure which housed the Dragonian ceremonies. 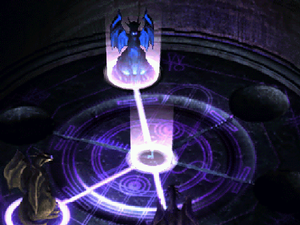 The Dragon Statues after the crystals have been deactivated.

Inside existed six statues of the Dragons, and at the center, a pedestal on which the Dragon Tear was to be placed. This room allowed the use of the artifact to switch bodies; the puzzles would have to be activated first to supply power to the ritual area, though as stated above, the Dragon Tear could unlock the power by simply being placed in a stone slot at the entrance. The room also contained a mural depicting the history of the world as artistically represented by Dragonians.

Unlike many other Dragonian ruins, Fort Dragonia did not fall into disrepair after their extinction after 920 A.D.; its defense systems and machine guards still roamed its corridors. It remained unused until 1020 A.D. in both dimensions. In Another World, when General Viper heard that Porre was planning to invade El Nido, Lynx advised him to take up a defensive position at Fort Dragonia. However, this was done merely to lure Serge to the structure; once arrived at the top, the boy was challenged by Lynx, who eventually switched bodies with him and then stabbed Kid. The ceremony exploded the statues of the Dragons in the ritual room and also shattered the Dragon Tear of Another World; Karsh subsequently came in and picked up the pieces, attending to General Viper as well. Fort Dragonia would not be used again for any purpose after this event. In Home World, Fort Dragonia remained dormant until Serge, still in Lynx's body, took the Dragon Tear of Home World with him to reacquire his original body. Lynx tried to stop him from achieving this, but was defeated and had to retreat. When Serge reached the ritual room, a mural on the wall depicted the evolution of humanity. Serge then successfully received his body; the Dragon Tear shattered once more, yielding the Tear of Love. Before leaving, Serge also used the incubation system to hatch Draggy, who accompanied him in search of his parents and friends.