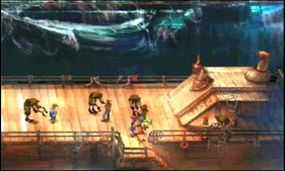 For other uses, see Ghost Ship.

Ghost Ship (幽霊船, yūreisen?) is a location in Chrono Cross. After slaying the Hydra at the Hydra Marshes of Home World, and after Kid is restored by the Hydra venom, Serge has the option to approach a cloaked ship west of the Sea of Eden. Fargo, captain of the S.S. Invincible, the cloaked ship, tests the strength of the party by forcing them to battle Men-Of-War, a giant parrot named Polly, and Fargo himself. Winning the consecutive battles, Serge and his team are imprisoned below the decks. A ship approaches the Invincible. Legions of undead soldiers board the vessel and engage its sailors in combat. Serge and his friends escape their prison, battle the undead creatures, destroy the DeadHead that commands the legion, and restore order to the ship. If Kid is not saved, the Ghost Ship event becomes available immediately after battling Harle at the Hermit's Hideaway.

The Ghost Ship scenario can be experienced regardless of whether Kid was cured of of the Hydra poison. If Serge and his companions elected not to save Kid, star-levels would be granted for each of the initial battles fought on the S.S. Invincible, as well as the final fight with the DeadHead, for a total of 11 stars. If the Hydra Humour was obtained and Kid cured, only the DeadHead issues a star-level, for a total of 8 stars. However, later boss battles unavailable to the timeline where Kid is not saved make up for the difference in star-levels.

Because Serge cannot be removed from the party at this point in the plot, it is unnecessary to bring another White-Innate character along, if another is even available at this point in the game. Although the fights with Polly and Fargo occur at the beginning of this scenario, it may be unwise to bring Blue- or Red-Innates, due to the powerful Flap Tech and Blue Tech cast by them respectively. The best strategy for dispensing Fargo is to turn the field Red either by using Red Field or casting Strengthen on each party member, then if Glenn has been recruited, boosting his and Serge's Stamina and Element Grid until X-Strike can be performed.

After the Ghost Ship's crew boards the Invincible, most foe combinations encountered are two DeadBeats and one Crossbones. The best strategy for dispensing is enemy formation is to use the other two party members to physically engage the DeadBeats to raise their Element Grid and cast EagleEye and Strengthen on Serge, then have Serge use Dash&Slash on the Crossbones. Be mindful that if Glenn is in the party, and he has an Element Grid level of 3 or higher and full stamina, the X-Strike Dual Tech will replace Serge's level 3 Tech, so it is best to have him buff Serge or cast a White Element such as PhotonBeam or Meteorite to lower his Grid level.

Due to the high abundance of Black-Innate foes, bringing along Luccia, Guile, and Mojo is inadvisable. Although their Innate coloration will make enemy techs deal less damage, their damage output will prolong these battles longer than necessary. It is best to stick with party members that have a strong physical offense or one's that can deal high-levels of damage with White elements, the former being preferable since Serge's Dash&Slash, combined with the buffs EagleEye and Strengthen, make short work of all foes encountered here.