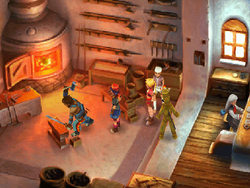 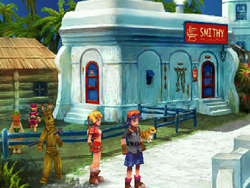 The Smithy, informally known as Zappa's Smithy is a location in Chrono Cross. Owned and operated by Zappa and his wife, Zippa, this shop is stationed in upper Termina near the mansion of Gogh. Serving as a blacksmith to the Acacia Dragoons is Zappa. His wife, Zippa, serves as the clerk and receptionist of the smithy. Preferring to work alone, Zappa forges armor, swords, shields, helmets and other useful battle items here with a massive forgery. Items can be dismantled for valuable raw material, and with raw materials and gold the player can craft new items here as well. Stop by here periodically to check for new inventory.

Venturing to the Zenan mainland in search of the illustrious Rainbow Shell, Zappa and Zippa settled in Termina and opened the Smithy after Zippa gave birth to her first son, Karsh. Ever since, they have applied their business skills and their thirst for acquiring rare materials, to smelt gear for the Acacia Dragoons.

Pierre, the would-be hero, rents the back portion of the Smithy. A child that plays in the adjoining yard stole his Hero's Medal and sported it around, playing with the other kids, until Kid realized the artifact was stolen and the kid relinquished, confessing its better to give up his dream of being a hero than being a thief. Ironically, Kid is a thief. Returning it to Pierre, he advises the Serge check out the store in front to stock up on valuable weapons. Should he have acquired the Profiteer Purse behind the staircase in Gogh's estate, he can dismantle it at this time to acquire Iron and forge powerful steel weapons, such as the Steel Swallow and Steel Sword before venturing into Viper Manor. Other valuable weapons usable by the other guides (Guile and Nikki) can be purchased here as well.

After defeating the DeadHead aboard the S.S. Invincible causes Zippa to mention that newer weapons are able to be sold, namely those of Bronze quality. Bronze Mail is also craft-able at this time and is highly recommended. After making a purchase, Zippa asks the party to find a sample of the Rainbow Shell, with it, her husband will be able to forge items superior to any he has ever crafted previously. This weapon is Serge ultimate Swallow, the Spectra Swallow. Before being able to do so, Serge first decides to commandeer is original body through the use of the Dragon Tear. After which, he brings Zappa to meet his counterpart in Home World and together they forge the Rainbow Axe, a Key Item necessary for crafting the Spectra Swallow.

After traveling to the Dead Sea, gear made from Iron and Bronze are no longer forged here. For specific crafting materials see the item's page.

This section of the article is a stub. You can help Chrono Wiki by expanding it.