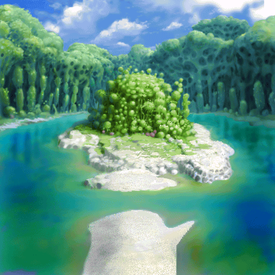 Gaea's Navel (世界のへそ, sekai no heso?, "World's Navel") is a location in Chrono Cross. It can initially be seen from the sea by boat, but can't be entered. Later in the game, it can be entered using a Beeba Flute together with Ancient Fruit; a Wingapede (tamed by feeding it the Ancient Fruit) takes the party here.

It is necessary to visit this area in Home World to receive the Green Relic from the Green Dragon - this is also where the party meets Leah. The one in Another World is optional, but is the only area where the Snakes & Orbs Frame can be found.

Untouched by human influence since prehistoric times, this island is in the sea of El Nido. Its disconnection from the other large continents of the world allowed it to retain creatures that otherwise were extinct. Its modern history began with Chronopolis; when the time fortress divided up the Dragon God, it placed the Green Dragon to reign there. Additionally, another species on the main El Nido island discovered a way to access the isle, whose sheer cliffs made entrance by sea impossible. The Beeba learned that they could call forth Wingapede monsters using a Beeba Flute and tame them with Ancient Fruit; they could then ride the Wingapede to Gaea's Navel. They afterward made frequent trips, soaking up life at the Hydra Marshes and abroad. The Green Dragon meanwhile fell asleep, shielding itself away from external influence. In 1020 A.D., Serge, who required the Green Relic from the Dragon, learned how to travel to Gaea's Navel from the Beeba. Around this time, a girl named Leah somehow arrived on the island in Home World as well. Serge piloted a Wingapede to the Navel, and spoke with her; she noted that the Green Dragon was sleeping, and would probably wake up if Serge caused an uproar. Serge then sought on and defeated several enemies while raiding treasure; this caught the attention of a Tyrano, who unsuccessfully tried to kill the boy. Serge then found the Green Dragon and fought him for his relic, leaving the island soon after. In a few days time, the Green Dragon left as well in order to unite into the Dragon God once more.

How Leah arrived on the island is an enigma. In all probability, Leah most likely slipped into a strange Gate or temporal distortion in the years before 65000000 B.C. The veracity of her status as Ayla's mother is debatable, but it is possible that Mystic Mountains of Prehistory was temporally active (Kino also strangely appeared there one day). The Gate took her to Gaea's Navel (which existed even before Chronopolis terraformed El Nido, which provides for her ability to return and mother Ayla before El Nido would have been created). She then presumably returned the way she came after Chrono Cross concluded.