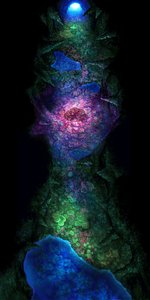 Death's Door (死の門, Shi no mon, Death's Door?) is a location in Chrono Cross. It is the small passageway that connects the Dead Sea to the outside world.

To prevent entry, Lynx placed the demonic Masamune there after it had been found in 1017 A.D. Serge accessed Death's Door after using the Fiddler Crab given to him by the Sage of Marbule; Radius noted that the Einlanzer would have to be brought there to counter its effect. When this was done, the Masamune was dispelled and free access to the Dead Sea was made possible. After the Dead Sea fell to ruin, Death's Door liquidated, allowing boats to enter the Sea of Eden at will.