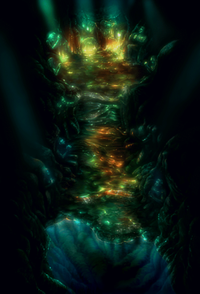 Pearly Gates (神の門, Kami no mon?, lit. "God's Gate") is a location in Chrono Cross. It is an opening to the Sea of Eden from the rest of El Nido. When Chronopolis terraformed the the islands, it sealed the Pearly Gates to ensure no one would find the time research station; legend soon passed down that the Dragon God had sealed the Frozen Flame up inside the sea and was the one responsible for hardening the Pearly Gates. Legend also correctly dictated that the first settlers of El Nido passed through the pearly gates before it was sealed. Strange statues are carved into the wall, which terminates midway through. Serge explored the passage before Harle told him that he would have to find another way in. Explorers also occasionally visited the area, struggling to find a way in. They proposed the Dragon Tear as a possible method of infiltration, but were disheartened after learning it had been stolen.