Serge (セルジュ, , Serge?) is the lead protagonist of Chrono Cross. He, just like Crono, is a silent protagonist.

Seventeen years old at the start of Chrono Cross, Serge sports an athletic build and dexterous finesse with Swallows, having trained in the arts of this complex weapon extensively prior to the events of the game. Covering his messy blue hair is a red bandanna, embroidered with a gold, floral pattern. His eyes are violet, although in some full-motion videos, they are depicted as amber. He has an upturned nose and defined chin, very similar to those of his father, Wazuki. For clothing, he wears baggy indigo-colored shorts with a pattern of a lighter blue running just above the hem. He also wears a tight, dark undershirt, covered with a vest of gray and brown fabric. Around his neck is tied a black rope, with a metal pendant that appears to be an inverted Venus symbol (indicating masculinity). On his hands, he wears brown gloves, and on his feet, he wears black shoes with brown tips. He wears bright pink socks as well.

Serge's existence is a contradiction between the dimensions the basis for much of the philosophical discourse in Chrono Cross. Born to Marge and Wazuki of the fishing village of Arni in the El Nido Archipelago, Serge had a storied history with the world since before he knew how to write. At the tender age of three years old, he came into contact with the Frozen Flame as a result of his father Wazuki's desperation to heal his son after he had been mauled by a panther demon. The contact healed him and designated him as its Arbiter, or controller; this caused the Frozen Flame to be unusable by the supercomputer FATE due to the Prometheus Circuit. Due to its obviously advanced technology, it had no problem binding both Miguel, a friend of Serge's father, and eventually Wazuki himself into cruel servitude. For the time being, however, Serge escaped unharmed with Wazuki, who was only mildly corrupted by the computer. Back in Arni, Serge became good friends with Leena, Miguel's daughter, and the other inhabitants of the village, who took interest in watching him grow. Forces beyond his control would soon threaten his life again, however. 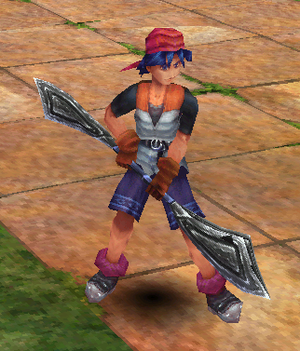 Serge with the Steel Swallow.

Four years later, Serge nearly drowned at Opassa Beach. His father, whose mind was forfeited to FATE completely, was instructed to drown Serge to release the lock on the Flame. Wazuki attempted to accomplish the feat, but Kid traveled back in time to 1010 A.D. and stopped him. The attempt on his own son's life corrupted Wazuki fully; he was recalled to Chronopolis and reshaped as Lynx. Serge only caught a glimpse of his savior before returning to the village. In time traveling, Kid effectively split the dimensions; the one in which Serge lived came to be known as the Home World. As a result of the destruction of Home World's version of Chronopolis, the Record of Fate terminals in that dimension ceased to function, which was something FATE could not allow. Therefore, the computer concocted an elaborate plan to get Serge to unlock the Flame by stealing his body and fooling the Flame into thinking that the Serge facing it was genuine, using Lynx to carry this plan out. The computer predicted that Serge would one day use the split he had created to cross the dimensions. This was fulfilled ten years later in 1020 A.D.; Serge began the fateful day by collecting Komodo Scales for Leena. After a talk with her on the beach about old times and a promise they made to each other, a huge wave rolled in and crashed upon the boy. He had successfully crossed over to Another World. When this occurred, Serge was confronted by a squad of Acacia Dragoons, Solt and Peppor, under Deva Karsh, but was saved by Kid. He managed to discover his death in this world, so he set out to figure out why this was true, and why the Dragoons were trying to capture him. 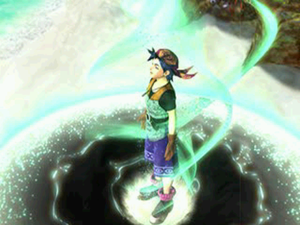 Serge transports to Another World.

Kid had befriended Serge on Cape Howl, and the two traveled to Termina, where they found a third person (the player can choose between Guile, Pierre, and Nikki) willing to infiltrate Viper Manor with them. During the night's events, Lynx confronted Serge, calling him the "Chrono Trigger" and attempting to capture him. Serge dove over the balcony to the sea with the others, and was taken to Guldove for treatment. There, Kid's illness caused him to make a decision -- whether to look for Hydra Humour, the required panacea, or simply continue on his journey. If you choose to continue your journey, Macha, Doc, and Glenn will join your party. If you choose to save Kid, Korcha, Mel, and Razzly will join your party. Whatever the case, he soon discovered that the Acacia Dragoons were amassing at Fort Dragonia. He consulted old man Radius for advice, and found that to cross Mount Pyre, he required the Ice Breath of the Water Dragon. While attempting to dock at the bank of Pyre, he was captured by Fargo and thrown in the hold of the S.S. Invincible. He later won the pirate's respect by defeating the Ghost Ship invaders, and sojourned to the top of Fort Dragonia. However, Lynx initiated a Dragonian ritual with the Dragon Tear and switched bodies with Serge, leaving him in the body of a panther Demi-human. He was then banished to the Temporal Vortex, only escaping with Harle's help. 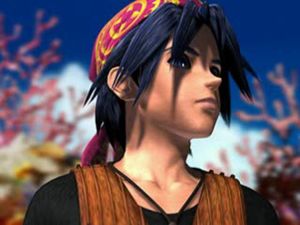 Serge in an FMV.

Left with no option but to seek out Lynx, who was on his way to Chronopolis, Serge explored his options and made new friends as his former party members dispersed throughout El Nido. He concluded that he would need to go to the Dead Sea to regain the power to cross the dimensions and reach Another World; to this end, he sought out the Sage of Marbule, who awarded him the Fiddler Crab upon being defeated. In the Dead Sea, Serge met Miguel who revealed much about his history and also challenged him. Serge reluctantly finished off Leena's father; the Dead Sea then collapsed in an attempt to destroy Home World's Frozen Flame and kill Serge in one fell swoop. The Sky Dragon saved Serge, who soon learned that to enter the Sea of Eden in Another World, he would need to regain his body. He borrowed the Dragon Tear of Home World and defeated the six Dragons to obtain their blessings to allow passage into the Sea of Eden. With his real body returned to him, Serge used his endowed power to break into Chronopolis and confront Lynx, who explained why he needed Serge's body. He defeated the supercomputer FATE in mortal combat, only to discover that he'd been duped by the Dragon Gods, who took the Flame for themselves. Upon chasing them, he learned of Lavos' new form, the Time Devourer. Using an anti-gravity device, he used Korcha's boat to rise to Terra Tower and defeat the Dragon God. He then returned to Opassa Beach, where the Ghost Children revealed his unknown history. 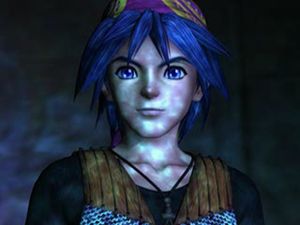 Serge in an FMV.

Project Kid's entire purpose was to endow Serge with the necessary artifact, the Chrono Cross, and the required power to free Schala from the Time Devourer. Everything, including the split of the dimensions, was predestined to bring Serge to that one point in time. The decision to save the world was then ultimately left in Serge's hands, along with a Time Egg that could take him to the Darkness Beyond Time. In the end, with Belthasar's aid, Serge was victorious over the monster, restoring the two divergent timelines into one unified timeline where Serge lived, Schala was rescued, and Lavos was destroyed. Serge supposedly lost his entire memory of the ordeal, but upon waking up on Opassa Beach at a point in time immediately before he traversed to the other world, he said something to Leena about Terra Tower and FATE. It is thus uncertain how much of his memory truly remains, or what the fate of the other characters in Serge's party turned out to be -- or certain characters from the original game, for that matter.

In a picture shown at the end by Schala's diary, one can see a photo of Serge in clothing similar to a tuxedo and Kid in what is similar to a wedding dress to indicate the two got married.

In Radical Dreamers, his grandson reads his diary on a desk (recreated in Chrono Cross's opening movie). Serge, the narrator and player character, is a wandering musician who has been traveling with Kid and Gil for three years. He is vocal and has a greater affection for Kid than the Serge in Chrono Cross. He is a somewhat inexperienced knife fighter who is easily pleased when Kid praises him. After his grandson reads his diary entry, his friend calls him Serge and invites him to explore some ruins with them.

Serge is the main character of Chrono Cross, and thus, he is a mandatory part of the party from the very beginning of the game.

Serge comes from the Roman name Sergius which is Latin for "servant". Many Popes, Martyrs, and Spiritual Leaders take this name, likely influencing and changing its meaning. Serge also greatly resembles the word "surge", which is a sudden outpouring, such as with a river or electrical current.