"Our business is done. Shall we head back home? Kiki, Lolo, Una, Gonji, and all the others are waiting."
— Radius

Radius (ラディウス, , Radius?) is the wise chief of Arni in Home World and a former Deva of the Acacia Dragoons in Chrono Cross. Before Serge ventures to Lizard Rock, he serves as a tutorial instructor for battle mechanics, Element Use, and Stamina. Radius also makes an appearance in Radical Dreamers: Nusumenai Hōseki as an imprisoned Dragoon.

Radius appears as an elderly man. With thick eyebrows, a thick beard, a mustache, a bald head, and wrinkles to match, Radius assumes many features of the wise elder he is portrayed as. Macilent and tall, he sports a walking cane, white robes, and a white outer-garment with blue trim.

Born on the Zenan mainland, he made his way into the service of the Dragoons, where he met Zappa, Garai, and General Viper. The sagely man demonstrated a fantastic combative skill while in service of the Acacia Dragoons, and soon was promoted to Deva alongside the others. In 1005 A.D., the four warriors tore up the battlefield and established a reputation of ferocity. Sadly, this tenure was disrupted by tragedy when Garai and Radius happened upon the demonic Masamune. Radius was consumed with its power and murdered Garai in a fit of insanity; while the other Dragoons accepted the incident as an accident, it caused Radius to seriously reevaluate his life. Radius buried Garai at the Isle of the Damned, and began leading a more spiritual life. Already middle-aged at this time, he retired later in 1016 A.D., resigning to Arni to become its chief. There, he sought to establish a kind and knowledgeable leadership; he decorated his chief's hut with wise sayings and other resources, and laid down his sword forever. When Dario died after being corrupted by the Masamune, Radius took the Einlanzer and placed it at Garai's grave at the Isle of the Damned.

During his stay at Arni, he counseled the villagers and held seminars on the lawn in front of his hut. He taught Serge how to use basic Elements in this manner. His life remained relatively peaceful after Serge crossed the dimensions until Serge returned with the body of Lynx; Radius, suspecting the evil Demi-human himself had come to Arni, called him out for battle. Though Radius was defeated, he detected that Serge's spirit was truly in Lynx's body, and soon conversed concerning his travels. The duo decided that they needed to journey to the Dead Sea; this led them across El Nido and eventually to Death's Door. There, the demonic Masamune blocked passage to the Dead Sea through an evil aura; Radius regretfully noted that the Einlanzer alone could dispel the negative energy. Radius and Serge subsequently journeyed to the Isle of the Damned and attempted to remove the sword; Garai's spirit angrily arrived and challenged them to fight. Radius reluctantly defeated his old friend again, and speculated that perhaps Glenn would kill him as penance. Radius then remained with Serge for the rest of his travels, eventually meeting his dimensional equivalent in Another World. When he approached the Frozen Flame, Radius showed weakness in being tempted by a dark power once more, but was able to stand against the evil influence 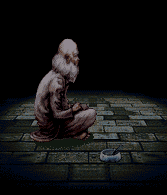 While never mentioned by name, it is conventionally accepted that the Old Man in the Viper Manor Catacombs is Radius. Once a prominent member of the Acacia Dragoons, the Old Man resigns from his rank after Lynx befriends General Viper. Originally, the two form an alliance to search for the Frozen Flame, but Lynx quickly turns on the General (aided by Radius) and usurps the Manor, kidnaps his daughter, Riddel, and steals the sacred artifact. Mired in grief and self-loathing, Radius is locked in the Manor's Catacombs, where he was occasionally visited by Riddel until he revealed his involvement in the plot against her father. Radius returns a deep and amorous respect for Riddel, although she loathes him and wishes him a speedy death. Serge, Kid, and Gil find Radius in the Catacombs. Long imprisoned there, he has clearly gone insane. Gil notes that this insanity is, in fact, a mental shield used to assist Radius in coping with his betrayal and also mentions the only way to reach through to him is with the Dragoon Ring. After learning of the location of Lynx and the backstory of his life, the party bids him farewell. Before leaving, Gil bends the bars of his prison cell to release him. When he does not budge, he exclaims that Radius must walk through the bars himself; an allusion to how Radius ought to recover from his grief.

After Lynx joins your party and you return from the Dimensional Vortex, visit Opassa Beach (Home World). Then talk to Serge's mother in Arni Village. Radius will then challenge you and join your party after the battle.

In geometry, radius is a term for a line extending from the center of a circle to its border or circumference. In anatomy, radius is a bone on the thumb-side of the forearm of humans, the largest vein in the wing of an insect, and a series of vertebrae in fish.