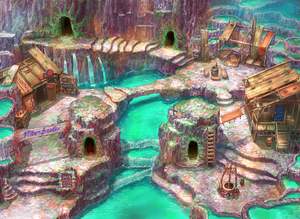 Marbule (マブーレ, Mabūre?) is a location in Chrono Cross. It is the island created by Chronopolis to house the Black Dragon. Once Humans and Dragonians populated El Nido, the resulting Demi-humans settled there and created a town out of the caves and outcroppings. They created a unique culture there; a sage led the village, while others traded for rare Elements and practiced arcane medicine. The people of Marbule also probably worshiped the Black Dragon; in any event, it commanded great respect from them. The Demi-humans of Marbule had a good rapport with humanity until mainland settlers from Zenan arrived after 920 A.D. The resulting exodus on the mainland pushed Demi-humans out to the corners of El Nido, leaving them embittered and angry at their human aggressors. This caused a schism that would last roughly one hundred years. Around or before 1010 A.D., a sailor named Fargo fell in love with a mermaid named Zelbess. The resulting marriage and union sparked hope of renewed dealings between the two peoples. Unfortunately, in both dimensions around 1011 A.D., Fargo had a falling out with Lord Viper and fled from him; Zelbess died in the process. In Another World, Fargo became a pirate, while the Demi-humans of Marbule continued to harbor a grudge against humans. Though humans could enter the village, they would be verbally assaulted and shunned.

The island containing the Demi-Human town of Marbule as it appears in Home World, pre-restoration.

The island containing the Demi-Human town of Marbule as it appears in Home World, post-restoration.

In Home World, after the dimensions split, the Black Dragon had a nightmare in Another World that manifested itself in Home World; this occurred in the form of several transparent monsters. The people of Marbule were forced to abandon their home; most signed their services to Fargo, who had become the operator of the S.S. Zelbess, a cruise ship. There, they were exploited for their physical labor, damaging relations further; Fargo noted that he would rather let Marbule die than attempt to restore it. In 1020 A.D., Serge sought out the Sage of Marbule on the Zelbess; the sage gave him a Fiddler Crab to access the Dead Sea. Nikki found the sage as well, asking him to teach him the song of Marbule in order for the Magical Dreamers to play it and save the island. The sage granted this request, and preparations were made to restore the isle. A few days later, the concert took place; the S.S. Zelbess was steered to Marbule by the Demi-humans, and the song successfully phased the monsters into physicality. They were destroyed by Serge soon after, clearing the way for the Demi-humans to create their settlement once more. However, humans joined them in reconstruction, solidifying a new, peaceful relationship between the two species. Marbule became an amalgam of natural landscape and wooden houses, and some of the humans who helped rebuild it stayed to live there. The Sage of Marbule and Fargo made up as well, setting aside their past differences to help usher in the new future of Marbule.