"Although I have no emotions, there is something warm and cozy about this letter."
— Robo, commenting on the letter left on the Rainbow Shell by Queen Leene.

Robo (ロボ, Robo?) is a robot originally created to assist humans at the Proto Dome in Chrono Trigger. His real name is Prometheus (プロメテス, Purometesu?), and his serial number is R66-Y. He uses his robotic arm as a weapon and although Spekkio cannot grant him the power to use magic (Spekkio being unable to properly read his character), Robo can use laser attacks that are similar to Shadow magic and bomb attacks that are similar to Fire magic. He also sports several healing techs. Along with his sturdy physique and high physical damage capabilities, he is the most versatile character in Chrono Trigger.

Rotund and bulky, there is no doubt Robo packs a punch. Unlike the other R-Series robots similar in construction to him, which are blue, and Atropos XR which is pink, Robo is beige and brown. The color of his metal skin is presumably the result of the weather in 2300 AD, which appears to be severely polluted. The color may also be attempt on the part of the game designers to highlight the dissonance between Robo and the other robots of this era. His outer body equates to an exoskeleton of metal plates that splay or separate under duress or emotional excitement. Underneath, there is a soft layer of what appears to be black rubber or another sleek oily material. 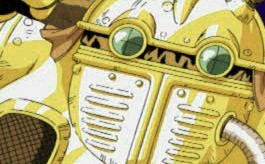 Robo in the FMV.

Robo is bipedal with two claw-like feet and two arms, one serving as a three-fingered mandible and the other as a laser cannon or spring-loaded fist. Robo also has bluish green eyes. Vents serve as the creature's mouth and nostrils.

Robo is decidedly male. The other robots refer to him as such, and his romance with pink Atropos XR also alludes to the robot's gender. On his back, Robo wears what appears to be some sort of cooling apparatus, indicated by the smoke-spewing chimney that branches from it. Robo speaks with a Victorian-esque eloquence.

Having a curious and bright personality, he was rendered dormant by the Apocalypse in 1999 AD, but is found and repaired by Lucca in the year 2300 AD. Upon his reactivation, Robo has no memory of his prior mission and joins the party. Alongside Crono, Robo assists in shutting down the power in Derelict Factory, which controls the power of the nearby domes, and thus permits access to a Gate back to the Present. Within the Factory, Robo shares a not-so-warm reunion with the R-Series, his former comrades and mechanical brothers. Their combined effort damages Robo severely, but Crono and his friends succeed in preventing the R-Series Robots from causing permanent damage. 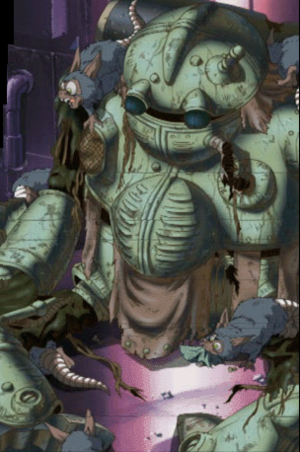 Robo as the party found him in the FMV of the PlayStation release.

Entering the Gate with his companions, he accidentally ends up at the End of Time where Gaspar explains only three beings can travel through a Gate simultaneously to avoid ending up there.

After the resurrection of Crono atop Death Peak, Robo learns that he originated from Geno Dome, a robo-producing Factory east of the Derelict Factory and isolated on an island. There, he is punished by his corrupted maker, Mother Brain, for having sympathy for humans, and he meets his long-lost companion robot Atropos XR. For the first time since Lucca reactivated him, he remembers his true function was to survey and be of service humans and prevents Mother Brain from spreading her poisonous tyranny to the other robots.

In the Middle Ages, Robo volunteers to spend four hundred years restoring Fiona's Forest. During this time, Robo ponders the existence of an Entity, a being who seemingly guided Crono and his friends through time with the intended purpose of intervening in its affairs. He explains his theory to the party when they reunite outside Forest Shrine in 1000 AD.

Defeating Lavos, Crono's companions return to their own periods. Lucca and Robo share a touching farewell, the latter explaining that Lucca had showed him the meaning of human emotion. Thereafter, he procrastinates entering the Gate back to the Future, fearing that because he toyed with time, so to speak, he would cease to exist in his original time period. However, in the most common ending of Chrono Trigger, Robo still exists in the new timeline and as the Epoch is searching for Crono's mother, Robo and Atropos XR are seen overlooking a more beautiful landscape (as Lavos didn't destroy it in 1999 AD).

In Chrono Cross, Robo makes an appearance as the Prometheus Circuit terminated by FATE. Masato Kato has officially gone on record as stating the circuit is Robo. "Anyway, if you have played Trigger, then Prometheus should be very familiar to you. I'm sure a lot of players would make a similar 'big fuss' over the death of such a much-loved friend..."

In Lucca's House, a portrait of Robo can be found hanging on the wall. The caption reads "robo made the desert green", referring to the time he spent with Fiona, restoring her forest.

Robo is a very versatile character, able to take the most damage of any character, while being a very strong physical attacker. He possess a wide variety of single, dual, and triple techs, which inflict damage and heal other party members.

Robo has no element, so he has no weakness. However, he has Fire, Light, and Shadow element techs; and the remaining techs are mostly physical in nature.