From Chrono Wiki, a database for the Chrono series that anyone can edit
(Redirected from Old Man)
Jump to navigation Jump to search

"What happened to the kid with the punk hairdo?" - Gasper

Gaspar, known in Japan as Hash (ハッシュ, Hasshu?), also known as the Guru of Time, is a character that appears in Chrono Trigger. When Crono and team meet him at the End of Time, he is known as the Old Man.

In Chrono Trigger, Gaspar is one of the three Gurus of Zeal in the Antiquity. He is known as the "Guru of Time".

When the Mammon Machine was activated, it began absorbing too much power. Queen Zeal and Schala along with the three Gurus were the only ones at the Mammon Machine's activation. The Gurus warned of a dimensional vortex, a power humans cannot control, and they would be dragged into a rift in time, yet the Queen persisted in activating the machine. Soon, Janus entered the room for Schala. Suddenly, the six were transported in front of Lavos. Gates then appeared and transported Belthasar, Gaspar, Melchior, and Janus to different times. Belthasar was sent to the Future, Gaspar was sent to the End of Time, Melchior was sent to the Present, and Janus was sent to the Middle Ages.

At the End of Time[edit | edit source]

Thousands of years later, Crono, Marle, Lucca, and Robo arrive at the End of Time. When Lucca asks where they are, Gaspar explains that it is not a question of where so much as when. He goes on to say that they are at the End of Time where travelers lost in time's flow turn up here, much like driftwood on a beach. However, he does not tell them his name.

He goes onto say that when four or more entities of varying origins enter a temporal rift together, the torsion exerted on time's flow pushes them to the point of least resistance, which is the End of Time here. He also says that there have been a number of people turning up at the End of Time unintended recently and he fears that something is having a powerful effect on the very fabric of time.

After meeting Spekkio and obtaining magic, Gaspar tells them that there were people who long ago also had the powers of magic. He then says that they should pay a visit to their own era and that they can come and see him whenever they wish as their guide on time's road. He also explains that the bucket he warned them about leads them to the Apocalypse, the Day of Lavos. He says that if they wish to see the world destroyed, then they should go, and that they may share the same fate. 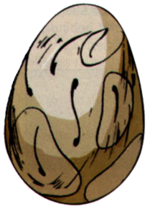 When the party arrives at the End of Time after Crono died by Lavos, Gaspar says that there is little he can do, though he honors Crono with a song, naming it "Memories of Crono". Magus says that only the Guru of Time can help them resurrect Crono, at which Gaspar recognizes Magus as Janus. He mentions that Magus has grown strong, though tainted of soul.

When Gaspar asks why they need the Guru of Time, the party explains that they heard he may know a way to restore life to a fallen friend. Before they leave, he gives them the Chrono Trigger, a "Time Egg". He explains that if they want to hatch it, then they should speak to Belthasar. However, he says that it may not necessarily hatch the results which they desire. As long as they keep Crono in their heart and pursue what they seek, the results should follow. At this, Magus realizes who he really is, and Lucca says that he is the Guru of Time, which Gaspar says is what they used to call him, long, long ago.

After reviving Crono, the party heads to the End of Time. There, Gaspar says that they should thank the ones who cared enough to see their friend returned to them and that the Epoch came to the End of Time and is sitting near the stairs that previously had no purpose.

He tells them that there are many paths ahead of them now. They could leap into the bucket, or fly the Epoch to 1999 AD to combat Lavos. They could also visit the Black Omen, which now "straddles time", seeking to summon Lavos again.

He goes on to say that he has had vague glimpses of events, people, and places that will empower you. He tells the party:

He says that some among them may know the figures behind the events which he has seen and that only with their strength combined can they save the future.

One of Gaspar's lines is believed to mention Schala; it may in fact be a reference to Queen Zeal (the character in question is Magus; Queen Zeal being his mother and Schala his sister, it may be either one.)

"One of you is close to someone who needs help... find this person... fast."
— Gaspar

The reason this could be either is that Gaspar will change this line after the defeat of Queen Zeal. This line is technically mistranslated from the Japanese version in which it told the player to go talk to their companions about their sidequests.&nbsp

"That poor woman can finally rest, now that the Black Omen is gone... She's reverted back to a human..."
— Gaspar after defeat of Zeal

The line above may only be seen if the party escapes from Lavos' shell after confronting it from the Black Omen. It refers to Queen Zeal having changed back to the way she (supposedly) was before being corrupted by the Mammon Machine; this may also have helped Schala (though at this point, Schala has already disappeared.)

In the Nintendo DS version of Chrono Trigger, after the party has visit all the Dimensional Vortexes, when they visit Gaspar he asks them if they have observed any odd distortions in time's fabric in recent days, which they say they have. He then explains that the bucket has seemed different lately. It is still connected to the Day of Lavos, but a "great power flows into it from some distant plane, far beyond even the darkened borders of Time's Eclipse". He mentions that it is a power similar to Lavos', though not entirely the same. It is a fearsome presence, yet he also senses a longing and loneliness as well. He says if they want to face it they can, though he does not recommend it.

Gaspar gets his English name from the traditional names given to the Magi (Caspar, Melchior, and Balthasar) who brought gifts of gold, frankincense and myrrh to the infant Jesus in the nativity story.