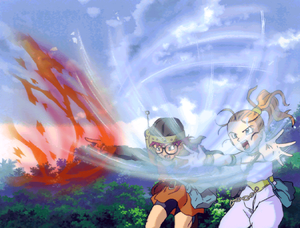 Magic is a force learned by mankind around the time of Antiquity. In Chrono Trigger, it is used to perform powerful offensive and defensive spells in combat. In Chrono Cross, Magical abilities are called Elements. Magic is practiced in Radical Dreamers: Nusumenai Hōseki by both Gil and Serge. Any time Serge attempts Magic, he fails due to a lack of preparation and nervousness. Gil, however, uses magic fluidly and frequently.

Roughly 3,000,000 BC, humans came into contact with a piece of Lavos. This initiated a genetic alteration that would lead to the evolution of human beings to be able to use magic.

It is unclear exactly when human beings first discovered magic. It was after 60,000 BC, but before 12,000 BC. By 12,000 BC, magic was in common use by humans, and the world was segregated based on ability to wield it: the Enlightened Ones, who could use magic, and the Earthbound Ones, who could not. The Enlightened lived on the floating islands of the Kingdom of Zeal, while the Earthbound huddled in caves on the world's surface - looked down upon by the Enlightened and often being recruited forcefully to do the latter's will.

At first, magic was very strong, enabling powerful mages - like the Gurus - to bring to life strange and inherently magical beings that they later called Fiends (or Mystics, as in the SNES/PS version).

Sometime after the downfall of Zeal, magic fell dead from the hands of mankind. Only Fiends were still able to use magic, making them very dangerous in the war against Magus in the Middle Ages.

Crono, Marle, and Lucca - all from 1000 AD - were able to learn magic by visiting Spekkio, the Master of War, at the End of Time. Later on, Frog is able to learn magic as soon as he becomes a party member again; thus, making it possible to obtain magical abilities before fighting Magus.

It is unknown if this means that magic itself has been reawakened or if these four can use it simply because they met Spekkio. After the floating cities of Zeal crashed into sea and continent, most magic-wielding Englithened Ones perished. A scant few survived. These survivors probably bred into the population of Earthbound Ones in Algetty and Last Village. After many generations, magic likely bred out of the gene pool, or its genes were recessive; thus, while genotypically remaining in chromosomes of descendants, phenotypically, magical blood diluted or never appeared in offspring at all. Frog's ability to cast magic asserts this claim. Enlightened Ones typical have blue hair, and the Earthbounds, light to dark brunette and blond. Mixed offspring may have a combination of the two: green hair. Glenn has green hair. The party members from Present Guardia are descendants of the Last Village tribes, thus magical genes must exist in their DNA, even if dormant. Spekkio could have amplified that affinity, or woken the dormant genes.

There are four elements in magic:

Every character in Chrono Trigger save Ayla and Robo can use magic, either naturally (as in the case of Magus), or by visiting Spekkio. They are signified in the character's Tech list by a star (*) to the left of the name.

Magic spells are Techs that use magical power. This differs from regular Techs in that a character's magic stat factors into how powerful the spell is. The magic stat for the two non-magical characters factor into other Techs in various ways, such as with Robo's energy- and explosive-based Techs.

Below are lists of magic spells, separated by character:

Crono learns magic on the first trip to the End of Time. His natural element is Light.

Marle learns magic on the first trip to the End of Time. Her natural element is Water, but she manifests it as Ice.

Lucca learns magic on the first trip to the End of Time. Her natural element is Fire.

Frog learns magic after you bring him to the End of Time after reforging the Masamune. His natural element is Water.

Being from Antiquity, Magus can naturally use magic. All of Magus' Techs are magical. His natural element is Shadow.

Non-magical Techs that use the Magic stat[edit | edit source]

Some Techs that are not classified as Magic nevertheless have elements associated with them and use the Magic stat when calculating their damage (or healing power). They follow their user's innate element when applicable.