In either 0 or 1 AD (depending on whether Chrono Trigger 's calendar follows the same conventions as ours), the first year of the new calendar, Guardia was founded, proven by the Millennial Fair which takes place every year and celebrates the founding of the nation. It is unclear whether the calendar is actually based off of the founding of Guardia, or if another important event occurred the same year.

From 580-600 AD, the Kingdom was embroiled in a battle against the race known as Fiends and their master, Magus, who sought the extermination of mankind. In 600 AD, Queen Leene was kidnapped by covert Fiend operatives led by the beast Yakra operating out of the land of Guardia. Later that year, a group assaulted the Fiendlord's Keep and destroyed it, ending the war.

In 984, Princess Nadia, daughter of King Guardia XXXIII, was born.

In 1000 AD, the Kingdom of Guardia celebrated its first 1000 years by holding a Millennial Fair in Leene Square. King Guardia XXXIII was put on trial by a descendant of Yakra, Yakra XIII, impersonating the chancellor, and was very nearly executed.

In 1005 AD, in the events of Chrono Cross, Guardia is invaded by the armies of Porre and destroyed (probably because of Dalton) . It is unknown whether the nation was still ruled by King Guardia XXXIII at this time, or if he had already been succeeded by Crono, who married Princess Nadia.

Truce is the capital of Guardia due to it's close proximity to Guardia Castle and its large population. Between 600 A.D. and 1999 A.D. it remains the major city of Guardia, but due to it's prominence in the Middle Ages, likely its place as capital has a much older origin. Truce is located on the West Continent. Porre, another major city, sits on the southmost tip of the Southern Continent, linked to the West via Zenan Bridge.

These cities dismantled or were destroyed during the Apocalypse, but their continental locations, although shifted by geothermal or tectonic activity, remain relatively similar to previous eras. Many newer buildings and ruins exist in locations where these cities might have been.

Millions of years in the past, the continent was pangeaic and separated sometime between Prehistory and Antiquity to form the continents. Massive volcanic subduction and glaciers from the coming Ice Age likely sculpted the many mountains and caves present in Guradia. Locations once lost resurfaced in the Future, solidifying this theory. Sun Shrine is one example of this.

Vegetation also forested the continents again, until destroyed by Lavos. Later, it was re-corrected by the time-travelers.

Through most eras, the standard unit of currency in Guardia is Gold, represented by the letter G (usually capital). In Prehistory, gold is accepted by minor apothecaries, but the merchant in Ioka Village Hut accepts Petals, Fangs, Horns, and Feathers as currency. In the Future, the authenticity and value of gold coins is questioned by the merchants, but are never turned down. Silver Points, a special brand of currency, is only obtainable and spendable in Leene Square.

Although a Cathedral exists in the Middle Ages, there is no evidence or reference to god(s) within. The only mention of deity stems from Robo, a sentient machine, who ponders the meaning of life and the seemingly intentional stream of events braided into the lives of inhabitants of Guardia while reforesting the Southern Continent for four hundred years. Sophisticated as this idea seems, the being is only named "Entity". Little else is known about it and little proof is given to its existence and role in the lives of Guardians. 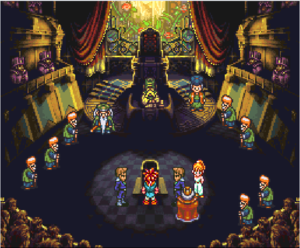 The trial of Crono in the Castle of Guardia

Guardia is ruled by monarchs and their successors; Guardia Castle is their seat. Surrounding cities are governed by Mayors (also called Elders) who maintain fiefs for the crown.

A judicial system was introduced some time between 600 A.D. and 1000 A.D. at the suggestion of the Chancellor; Queen Leene was kidnapped by Yakra, who impersonated a royal official, and stricter government was needed. After rescuing Leene and Marle, Crono is put on trial in the Present, represented by lawyer Pierre, in the very system his actions inspired. Ironically, whether the court finds him guilty or innocent of kidnapping Marle, he is thrown in prison, pending execution. This suggests that while democracy blossoms in Guardia, there are still faults, as noblemen refuse to relinquish their power.

Guardia is a Spanish noun for guard, defense, on the watch. On guard is a common phrase, in Spanish "en guardia".