From Chrono Wiki, a database for the Chrono series that anyone can edit
(Redirected from Kingdom of Zeal)
Jump to navigation Jump to search

The Kingdom of Zeal (ジール王国, Kingdom of Zeal?) was a nation in the Antiquity era of Chrono Trigger. It was home to the Enlightened Ones, and was the center of art, culture, technology, and most of all, magic. The Kingdom is comprised of four islands that flow above the continent and seas. Only magic-wielding folk reside within. There is a strong prejudice here against non-magical beings.

The Kingdom of Zeal was created when mankind discovered magic. What was soon discovered is that some people, no matter what happened or how they tried, were completely unable to use magic. The ruler of Zeal was given the name Zeal.

Around the time of the last Ice Age, the people of Zeal - using their advanced technology and magic - lifted the whole kingdom off of the earth. The islands of Zeal floated above the dense cloud cover that kept the planet shrouded in eternal blizzard. The non-magic-using people were left behind, being dubbed the Earthbound Ones. 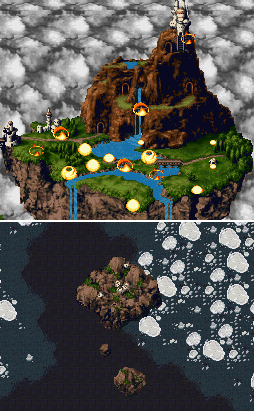 Zeal falls into the ocean after Lavos awakens.

Queen Zeal and her three gurus, Belthasar, Melchior and Gaspar, attempted to summon Lavos to obtain greater power from it. However, they were unable to control Lavos. The three gurus, as well as the prince and princess of Zeal, were absorbed into time portals created by Lavos and sent to various eras. The Kingdom of Zeal was destroyed by the unrestrained power of Lavos and sank to the bottom of the sea. Queen Zeal herself survived, somehow gaining tremendous power from Lavos despite the disaster, and her warship the Black Omen was isolated outside of the flow of time and hung in the air above the earth for eons. She was eventually defeated by Crono.

Humans after the fall of Zeal were unable to tap into the power of Lavos and so became unable to wield magic. Those who survived the fall of Zeal came to live on the frozen ground alongside the Earthbound Ones and the distinction between the two was lost. However, gifted individuals such as Spekkio are able to release humans' latent power and allow them to access magic once again.

Known by its citizens as The City of Dreams, Enhasa features countless beds and Zeal's usually stunning architecture -- golden windows, ornate walls, and spanning bookcases of erudition. Due to the Kingdoms technological and financial success, its citizens are prone to lavishness. In Enhasa, the "art of dreaming" is engaged in. Likely for prophetical gains. Belthasar also has a lab here. Several of his Nu creations are found within. Janus is first encountered here.

Known by its citizen as the City of Magic, Kajar is a magical research facility where the Pendant, Magic Capsules, and other Zeal technologies were created. Belthasar also has a lab here. The Black Gemstone is found within.

Seat of Zeal's Government, the Queen rules over the four-island flying continent. Dalton, Schala, Janus, and the Prophet dwell and sleep here. The Nu's backscratching technique is learned here. Many study areas and bed chambers are separated by magazzine levels here. The Palace is the original home of the Mammon Machine.

Originally suspended in the clouds along with the other continents, Mountain of Woe serves as Zeal's prison. Any who oppose the royal family are locked here. The Mountain is later chained to the Earthbound Continent below, though it still hovers slightly over the sea.

Also known as The Undersea Palace, this sub-aquatic domicile is the new home of Mammon Machine. Its distance from the main continent adds mystique to this research facility for dangerous magical experiments. Proceeding the awakening of Lavos, the Ocean Palace is destroyed. It raises to the sky as the Black Omen, a warship with devilish denizens.

Although inaccessible during Antiquity, the Sun Shrine houses the obsolete energy source of Zeal, the Sun Stone. It is sealed away in a magical prism along with Son of the Sun, its guardian.

Isolated on an island East of Zeal Palace sits a magically sealed structure. Housing the Elemental weapons of the Palace prior to the advent of the Mammon Machine, this structure was only accessible through the Pendant given to Schala by the Gurus. Originally, it was intended to be a dungeon, explorable in the Present, but was cut from the game for unknown reasons. In the Present, a Nu resides here amongst two Sealed Chests, one contains the Swallow, the other contains the Guardian Helm, artifacts of the once prominent Floating Kingdom. However, the Nu only allows the player to choose one chest to open.

A flying fortress piloted by Dalton. After Zeal crashes into the sea, Dalton imprisons the party there. It is demolished after they escape.

Land Bridges and Skyways link the many sky-islands of Zeal to each other and to the ground. Magical energy in the form of sunlight teleports those who step upon the glyphs to their corresponding constructs.