"What are you hanging around here for? I thought you guys said something about a nice little slide show."
— Crono

Crono (クロノ, Kurono?, "Chrono" in Japanese media) is the silent protagonist in Chrono Trigger. He lives with his mother in Truce in the Present. His personality matches that of the conventional hero archetype and he is willing to place his life on the line for the sake of others.

Crono has spiky red hair. He has green eyes and wears a short sleeved green shirt underneath a light blue tunic. He also wears a black belt, along with yellow pants, a pair of dark brown boots and gauntlets, a white headband around his forehead, and an orange ascot around his neck. He always keeps a katana close at hand.

Born in 983 A.D. to Gina and an unnamed father in the city of Truce, Crono quickly befriends a girl named Lucca. Seventeen years later, on the day of the Millennial Fair, Crono met his bride-to-be, Marle, though he did not know it at the time. Together, they enjoy the fair's festivities until the unveiling of Lucca's new invention, the Telepod. Always faithful to his friend, he agrees to test the device despite all dangers. The transportation is successful. However, when Marle tests it, she is sent back in time. Following her, Crono returns her to the Present and rescues her lost ancestor Queen Leene to ensure Marle's birth in that time period. 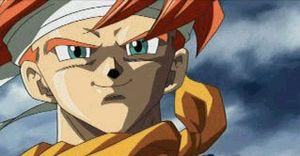 Crono in the FMV.

Returning Marle to Guardia Castle, her home, Crono is accused of kidnapping her in attempts to thwart the throne. Represented by Pierre in a trial, Crono is sentenced to death. Lucca frees him seconds before he is brought to the Guillotine and together, they flee the Prison Towers. On their way to Guardia Forest, Marle tags along and the three travel to the Future via an open Gate. Investigating the area in search of a means to return home, Crono and his friends find food supplies for the inhabitants of Arris Dome, where he also meets his descendant Doan and learns that the ruined future was caused by Lavos. He vows to save the planet from destruction through the use of time-travel. Shortly after, he assists a robotic man named Robo in deactivating a Derelict Factory to find a way home.

Entering the Gate, he arrives at the End of Time where he receives magical abilities. With the aid of these powers and the powers of his allies, Crono successfully reforges the Masamune by acquiring Dreamstone in Prehistory and attempts to slay the Fiendlord, Magus, who he believes is the root of Lavos' presence in the time line. This leads him back to Prehistory where helps the Iokans destroy the Reptites, thus securing the evolution and prosperity of the human race whose lives were jeopardized by these sentient lizards. Directly afterward, he realizes Lavos was not summoned by Magus, but is an alien species who fell from the sky in this time period. Attempting to follow the beast to the crater it created by landing, he is transported to the Antiquity era. 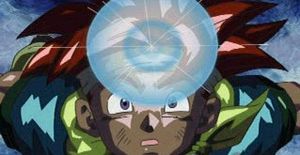 Crono's soul is eaten by Lavos in the FMV.

In the Antiquity era, he rescues Melchior from the Mountain of Woe and subsequently attempts to rescue Schala, the innocent Zeal Princess who is being exploited by her mother, Queen Zeal. When Crono confronts with Lavos in the Ocean Palace of the Kingdom of Zeal as a result of the rescue mission, he sacrifices himself to save everyone present. With time travel, his friends manage to replace Crono in the moment before he dies with a clone received from the Millennial Fair in 1000 A.D., saving his life. While the other six playable characters have many lines of dialogue, Crono's responses to events are usually implied only through reaction and gesture, often for comedic effect, which wrongfully depicts him as insincere at the moment of his resurrection. Returned to normal, Crono and two others confront Lavos, destroy it, and return peace to Guardia. After, Crono travels back in time to rescue his mother who haphazardly stumbled into a Gate.

There are some points where he's shown to have romantic feelings for Marle. At one point where he's knocked out, he has a dream where Marle is his wife. The PlayStation and DS versions of Chrono Trigger include an FMV scene at the end that shows Crono and Marle getting married. While a second FMV depicts the fall of Guardia Kingdom in year A.D. 1005, it is unknown what happened to Crono during this event. It is probable that he and Marle are alive during the events of Chrono Cross, as Doan (Crono and Marle's descendent) still exists in the new timeline of 2300 A.D.

Crono as a Ghost Child.

Crono's fate is implied to in Radius's statement about the Kingdom of Guardia no longer being peaceful. Like Marle, he is very likely alive as referenced in Lucca's letter about her friends. Three times in this time line, a version of him appears as one of the Ghost Children along with Marle and Lucca. The first time, he states that the future in which Earth is ruined by Lavos is going to be brought back into being due to the interference of Serge, who caused the Home World and Another World split. The second time is in an illusory space at Terra Tower, in which Belthasar enlightens Serge's party about some of the affairs of the Dragons. Crono's final appearance in Chrono Cross comes immediately before the final battle of the game. Crono tells Serge that Wazuki was turned into Lynx by FATE, and along with his fellow "Ghosts," the other two members of the original time-traveling group, implores Serge to destroy Lavos once and for all. 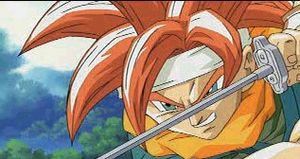 Crono in the FMV.

Crono wields katanas as a weapon. Typical among role-playing game protagonists, Crono is a well balanced character with no major weakness. His physical damage is respectable, along with his speed, health, and defense. Because he can equip some very strong weapons (including the Dreamseeker, the strongest weapon in the game overall), he's one of the main damage dealers. Crono possesses a variety of techs, which include offensive and support techs. He can cast Raise on allies to revive them, and for offensive techs, he can inflict both physical damage and magical damage, and his higher level magic techs hit all enemies.

As Crono's element is Lightning/Heaven/Light, he takes extra damage from Shadow element attacks.