"Dreamstone has been used throughout the ages, the Mammon Machine, and that Pendant were made from it, and so was that knife. "
— Masa

The Dreamstone (ドリストーン, dorisutōn?) is a Key Item in Chrono Trigger and appears briefly in Chrono Cross. This red, glossy stone is considered a status symbol in Prehistory and is used to reforge the shattered Masamune. The Masamune was originally forged in Antiquity (1200 B.C.) at which point Dreamstone still existed. The stone was lost from civilization sometime after the fall of that time period's prominent Kingdom, known as Zeal.

From Melchior, Crono's party discovers that the Masamune was forged from Dreamstone and that the sword cannot be repaired without this precious stone. However, by 1000 A.D., Dreamstone has been long lost. Crono travels back in time to Prehistory (65,000,000 B.C.) to retrieve this stone, which is in the possession of Ayla, the Ioka Village chief. The stone is passed on to the new chief with each generation, marking it as a symbol of power and leadership. Ayla awards Crono with a sample of the stone after being beaten at a soup-chugging contest. The stone is stolen by Reptites after this event and must be reacquired.

Since Crono can trade Petals, Fangs, Horns, and Feathers for weapons made from Dreamstone at the Trading Hut, it could also be considered a form of currency; though less valuable than natural materials. The North American versions of the game states that Dreamstone was used as money, but this is incorrect; Melchior merely states in the original that it was an ore valued above gold. Naturally occurring in the planet, Dreamstone is an exceptional conductor of the elemental energy of Lavos, even able to channel it for external use and store it for periods of time. It may be capable of channeling energy or magic in general; and simply, people of the Prehistoric Era had not developed magical affinities, so its worth then was sorely underestimated.

All known items crafted from Dreamstone are: The Masamune, The Ruby Knife, Marle's Pendant, Dreamstone Bow, Dreamstone Gun, and the Mammon Machine.

In one of the full motion videos present in the Chrono Trigger PlayStation release, Ayla returned to 65,000,000 B.C., after the defeat of Lavos, and married Kino with a Dreamstone ring. 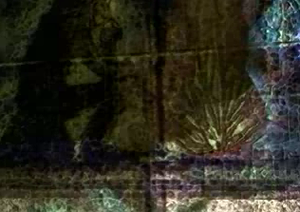 Engraving of Dreamstone at Fort Dragonia

Dreamstone never appears in the game, but Ultimania claims Dreamstone and Frozen Flame are identical minerals. Interestingly, Frozen Flame is a shard of Lavos and the Dreamstone develops naturally within the planet; however, both minerals react significantly to the energy of Lavos. While Dreamstone certainly is powerful, it was in possession by humans long before the creation of Zeal in varying amounts, apparently without expanding their mind. The Frozen Flame, of course, is responsible for the abnormal growth of the human brain when it made contact with humans in 3000000 B.C., metaphorically "cultivating dreams," leading the "apes" out of the caves to create Zeal and begin modern civilization. The question becomes a matter of whether Masato Kato had planned the Frozen Flame's existence at the time of Chrono Trigger's completion.

One interesting possibility that would bring both Ultimania and the game's canon into union is that perhaps Lavos's shell, was constructed partly of Dreamstone, of which Frozen Flame is simply a very special mutation (an intelligence, vital-functioning organism) that crystallized upon impact with Tyranno Lair and the surrounding crater of magma. This is unable to be confirmed, however.

A wall engraving in Fort Dragonia depicts Dreamstone, with a human kneeling at it. However, considering that in the same scenes a.) Lavos is modeled to be a giant, falling sun, b.) the Dragonians include the two moons in the history, though it did not exist until Dinopolis came around with Chronopolis, the Dragonians apparently had no idea what the Frozen Flame, Lavos, or other artifacts of the human world looked like. The apparent Dreamstone is thus probably a stylized rendition of the Frozen Flame, since the mural allegedly depicts the event of human modification in 3000000 B.C. through the Frozen Flame.