Rainbow Shell (虹色の貝殻 にじいろのかいがら, nijiiro no kaigara?) is a Key Item in Chrono Trigger and Chrono Cross. In both games, powerful weapons and items can be crafted from it.

The Rainbow Shell is a very colorful very large shell that can be forged into many useful and durable items. It can be found in Giant's Claw in Middle Ages after the defeat of the Rust Tyranno. Due to its size and weight, however, it cannot actually be lifted by the party (not even Robo is able to lift it), and is thus never actually added to the inventory. It is, however, carried back to Guardia Castle by the King's knights as a form of repayment for all the party has done to assist them (namely, rescuing Queen Leene and helping thwart the Mystic incursion at Zenan Bridge). 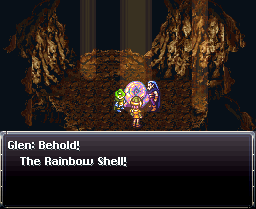 The Rainbow Shell in Giant's Claw

The Rainbow Shell is seemingly the fossil of an ancient, huge sea creature, compressed and refined by the unreal powers of Lavos's crashing into the planet. The result of this refinement is an incredibly strong and powerful mineral, imbued with elemental abilities and the subject of much myth and legend. It was apparently in the possession of the Reptites, whose Tyranno Lair was crushed by Lavos; the shell subsequently was reduced to a place of residence far below the planet's crust. It may have been visited by citizens of Zeal, or legends of it were passed through generations by the Iokans or Larubans; regardless, accounts of its power and beauty appear in Zeal's tomes, and even filter into the treasure hunting cliques of Middle Ages, evident in Toma's own desire to hunt the shell and the Dorino Elder's interest in it. Toma eventually located it in the Giant's Claw, which is the Tyranno Lair's second incarnation as an island that briefly appears in the Middle Ages. He was unable to procure the shell from its resting place, but in the Keystone Timelines, he informed Crono and the heroes of time of its location, after they poured a bottle of booze on his grave. It was subsequently recovered by knights of the Kingdom of Guardia, where it lay in its treasury for four hundred years, planned to be unveiled at the Moonlight Parade. 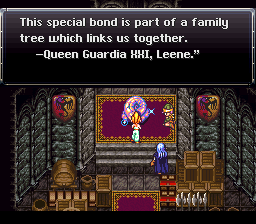 Rainbow Shell in the Vault.

The acquisition of the Rainbow Shell had a temporarily negative effect on the royal family, as Yakra XIII was able to forge documents detailing a transaction that supposedly entailed King Guardia XXXIII's selling the heirloom to a trader. The plot was foiled when a piece of the Rainbow Shell was taken from its resting place in the treasury, which was overrun by Yakra's henchmen. Marle finds a letter attached to the Rainbow Shell in the Present from Queen Leene, saying that family is permanent. The contents implied that at some point in her life she figured out that Marle was her descendant. She then removes a shard of the shell and brings it to the King's Trial.

This Prism Shard proved the King's innocence. Soon after, Melchior, probably the only person capable of doing so, assisted the party in creating new weapons and items for the party from the shell, including the Rainbow, Prism Dress, and Prism Helm. The Rainbow Shell's fate afterward is unknown, perhaps falling victim to the Fall of Guardia and being stolen by Porre.

The Rainbow Shell appears in Chrono Cross in the form of several fragments (19 in total), suggesting that in the previous years, the Rainbow Shell was indeed stolen from the Kingdom of Guardia and disseminated across the world, eventually arriving in El Nido. These Rainbow fragments are the highest weapons and armor grade material available, affording items of legendary quality. However, use is limited and probably confined to Serge's party, as the forging of such items requires the work of Zappa (and his dimensional counterpart working with him!) as well as the integration of shiny items imbued with elemental power and resulting from the use of Summons. 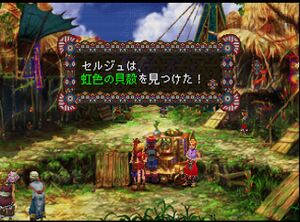 One of the Rainbow Shell locations in Chrono Cross, though it cannot be acquired when the shopkeeper is present