Mastermune (グランドリーム, gurandorīmu?, "Grand Dream") is Serge's ultimate weapon in Chrono Cross. It has a 100% critical hit rate, and also heals some of Serge's HP each turn. It can be found after defeating Dario on the Forbidden Island. Mastermune deals extra damage to Demon, Dragon, Floating, Human, Marine, Matter, Soft, and Zombie enemy-types. Mastermune is an allusion to the Triple Tech of the same name from Chrono Trigger.

Transformed from the holy sword, Masamune, its inhabitants (Masa & Mune) awaken and dedicate themselves to be helping Serge. Doreen melds with them to form the weapon. When it is equipped and Serge uses his FlyingArrow tech, Masa & Mune can be seen behind him powering it up. 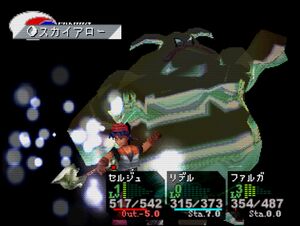 Serge using the FlyingArrow with the Mastermune equipped. Masa & Mune in their merged form can be seen behind him.
Retrieved from "https://www.chronowiki.org/w/index.php?title=Mastermune&oldid=50224"
Categories: