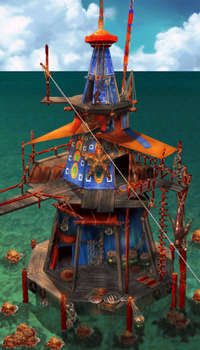 Guldove (ガルドーブ, Garudōbu?) is a location in Chrono Cross. Having been established long before Dragonians became extinct, it is the oldest human settlement in El Nido.

The people of Guldove created many traditions and legends during their long history, preserving the lore concerning the Dragon God and conversing with the Dragonian counterparts often. The town itself seemed to exist closely with nature; it was constructed off a rock formation that had emerged above the ocean. The people of Guldove used wood and cloth to construct a basic foundation; afterwords, they erected giant cone-shaped towers out of the same materials. Most of these towers utilized two levels; the lower area emptied to the basic foundation of the town, while a second set of walkways was created to allow access between second stories. In addition to residential towers, the people of Guldove established an eatery and Elements shop, and encouraged trade on their docks. The cloths of Guldove were stitched with ornate, decorative patterns. Their most important structure, however, was the tribal office, occupying its own tent and housing the high priest or priestess of the establishment, who served as village leader. Within, the Dragon Tear (a gift from the Dragonians) was kept, and the elder of the town gave counsel to those seeking advice or information. The tent was guarded by a man who screened visitors to the shaman. After El Nido was colonized by settlers from the Zenan mainland, this tent proved vital in safeguarding much of the lore surrounding El Nido.

By 1010 A.D., Chief Direa and later, her assistant Steena served as the regulators of the town. The village also distinctly featured a clan of relatives whose names ended in CHA; a sort of Guldovian accent was proliferated by this family's members. Serving the establishment as well was a doctor and his assistant. In Another World, the town's tradition continued to dwindle as the years progressed due to pressing influence by mainlanders. In order to further his plan of stealing Serge's body, Lynx influenced Porre to steal the Dragon Tear by utilizing Orcha as a spy. Later, Serge came to the village with Kid after their infiltration of Viper Manor; Kid was admitted to Doc's clinic, as she suffered from Hydra poison. Depending on events thereafter, Norris came by and administered Hydra Humour or Serge obtained some through his own efforts; the party soon left, using Korcha's Boat. The village was later attacked by a Porre outfit; Orlha the barkeep solely defended it until Serge arrived. The boy then visited Chief Direa to obtain the Dragon Emblem, which would convince the chief in the other world to see him. In Home World, the Porre invasion of 1017 A.D. adversely affected the town. Chief Direa died, and Steena became the sole leader of the village; many Zenan mainlanders came to the town expecting tourism and entertainment, whittling away traditions and culture. Serge visited Steena to obtain her Dragon Tear and reacquire his body in this dimension.

At Element Trade shops, you can trade Elements you wish to discard to receive a Material in exchange. Note that how many Elements you need to get the desired Material varies depending both on what the Material is, and also based on the combined level of the Elements you use when attempting to acquire that Material. For example, if you wish to trade away Elements for an Eyeball, you will need a combined level of "12". This means you would need 12 level-1 elements (such as Tablets) to buy it - in contrast, using a single level-7 element like + a single level-5 Element will be enough to net you an Eyeball.

The Element Trade shops found in Guldove (Both Worlds) have the same selection and "prices" as the one found in Termina (Another World).