Lucca's House (ルッカの家, Lucca's House?) is a recurring location in the Chrono (Series). Across the games, it appears as a lakeside villa near Truce; although located on a small island off the southern coast of the capital city, Lucca's House is considered part of it. It is house, home, and laboratory to Lucca, her family, and her creations. The inhabitants here change throughout various intervals in the location's history.

Lucca's House is the home of one of the main characters, Lucca, as well as her mother, Lara, and father Taban. Upon entering the house, one can expect to see multiple inventions in progress, as well as various haphazardly stacked books. Taban, also and inventor and mechanical genius like his daughter, Lucca, has transformed their parlor into a makeshift laboratory where many experiments take place. Visiting the location sporadically through out the time line will grant Lucca special equipment of her father's creation. Notably, the Taban's Suit, the Taban's Helm, and Taban's Vest. If Lucca wins a Doppel Doll at Norstein Bekkler's Tent of Horrors, it stores here.

After the Day of Lavos, the location disappears from the map completely. In fact, the location only appears on a single map throughout the time-line: the Present.

Ten years prior to the events of Chrono Trigger, a conveyor belt sat in the middle of the room. In 990 A.D., Lara attempted to clean off some of the machines, against her husbands wishes and warning, and her dress had caught on the conveyor belt. The machine accidentally turned on. The young Lucca, unable to figure out how to stop the machine, watched her mother become crippled. 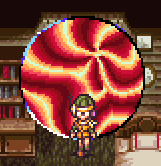 Lucca arrives at her house through a Red Gate.

At the end of the sidequest for Fiona's Shrine, when the party has recovered Robo after four hundred years of reforesting the desert of Dorino, the party camps in the newly sprouted forest and discusses the events that have occurred up to the current moment. The discussion turns to Robo's thought that an entity wanted the party to intervene in history and prevent the destruction of Guardia; later that night, when the group is asleep, Lucca awakes to a noise and witnesses a red gate appearing in the forest. Despite much speculation, the nature of this Gate's appearance is unknown.

Traveling through the red gate, Lucca arrives in her home, ten years in the past. Several journal entries in the house verify the time period. She encounters her younger self When she opens the door to the main room and realizes she has traveled back in time to the exact date her mother became crippled. A timed event begins once Lara becomes trapped by the machine, the player has a few short seconds to type the password into the machine created by Taban (who, being a loving husband, made the password his wife's name). No direction is given to the player on how to input the code, only that the code is Lara's name. In order to input the code and stop the machine from claiming Lara's legs, the player must utilize the letters of the controller, being L. A. R. A., Hence the code would be L button, A button, R button, A button. 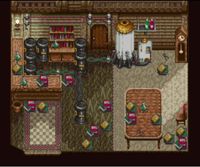 The Interior of Lucca's House

If the player successfully stops the machine before Lara is injured, a few changes are made to the remainder of the game. First, the player is rewarded with an accessory named Green Dream, which, similar to the event, gives a chance to save a player from death when equipped as an accessory. However, the more readily visible change is that Lara is no longer sitting; she freely moves around in Lucca's House, never having been crippled due to the alteration to the timeline.

In one alternate ending of the game, if Lara's legs are restored, she begs her husband, Taba, to dance with her at the Moonlight Parade in Leene Square.

Another alternate ending (not related to the incident with Lara and the machine) depicts Lucca, Frog, Marle, Robo, and Crono relaxing in her crowded abode, after destroying Lavos. Lucca repairs Robo while Frog watches. Frog remarks that Crono should be woken up, so the prior events and future events can be discussed. Marle barges into the room and protests against it and serves cold drinks to the others. Frog then states he has important business to take care of, and on his way out the door, trips over a stack of books. All those present laugh, sharing one of a moment of flippancy after their epic adventure. 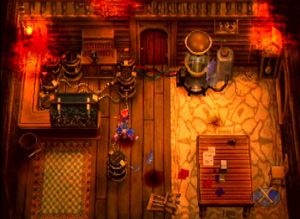 After her journey in Chrono Trigger ended, Lucca continued to research science, developing incomplete Time Eggs and undertaking other inquiries into the field of physics. She started an orphanage after she found Kid and presumably after her parents died; her house grew to be full of small children, for whom she deeply cared. They did arts and crafts (even drawing the original Chrono Trigger team), and referred to Lucca as aunt or sis. Lucca enjoyed her work, though she sometimes had to stem her childrens' curiosity in her scientific projects. Around 1015 A.D., Lynx attacked the house in order to abduct Lucca and force her to unlock the Prometheus Circuit. Though this ended in failure for Lynx, he managed to burn the orphanage and house to the ground, killing Gato and some children inside. Much later, in 1020 A.D., when Kid fell into a coma due to her memories of the incident; Serge traveled back in time with the help of Masa & Mune to alleviate her thoughts. He saved children that would have otherwise died, and caught a glimpse of Lynx as he surveyed the destruction. 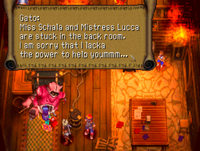 The console that almost severed her mother's legs was still in operation at the time; using the input L1, Triangle, R1, Triangle, released the HotShot machine intended for use by Kid. The Ice Gun, found here, is used to pass through flaming barriers.