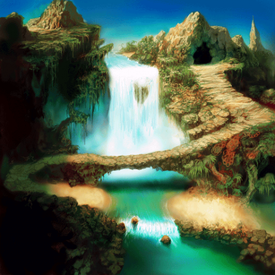 Divine Dragon Falls (龍の滝, , Ryū no taki, lit. Dragon Falls?) is the name given to a waterfall on the southern end of the main El Nido island in Chrono Cross. A "Power Spot", it allowed the Dragonians to tap into the planet's energy and forge Elements. It was also the site of many rituals undertaken in planetary celebration by the Dragonians, Demi-humans, and El Nido natives (probably from Guldove). A pedestal was also placed in the back end of its cavern, though its purpose would not be revealed to the Dragonians before their extinction. After mainlanders from Zenan settled El Nido in 920 A.D., the Dragonians became extinct and the rituals and festivals fell out of practice (though the latter process took considerably more time to complete). After 1010 A.D., the Explorer Corps dispatched adventurers there to learn more about the era; they successfully deduced that Dragonians forged Elements there, though they could not discern what the pedestals in the back were for. Much later, when Steena from Home World saw that Serge possessed the two shards of the Dragon Tear, she knew from old lore that they could be used to create an artifact known as the Chrono Cross. Serge subsequently placed them on the pedestals; they successfully united to form the long lost seventh Element, fulfilling the ultimate purpose of Divine Dragon Falls in the process.

In Home World, the Divine Dragon Falls are empty of both Demi-humans and explorers; the pedestals curiously do not exist either. Since they must have existed before the split (Steena, from Home World, notes that they're "still here" in Another World), they apparently were destroyed in Home World before 1020 A.D.