"They say people who hear Leene's Bell ring will have interesting and happy lives!"
— Litte Girl in Leene Square.

Leene's Bell (リーネの鐘, Leene's Bell?) is an iconic item, appearing in Chrono Trigger and Chrono Cross. In the former, it appears in the year 1000 A.D., nearly four hundred years since the rule of Queen Leene, the woman it was crafted for. The bell and the replacement (known as Nadia's Bell (マールディアの鐘, Nadia's Bell?)) hang in Leene Square in northern Truce.

Leene's Bell is a large, copper bell forged in the year 600 AD in honor of Leene, Queen of Guardia XXI. The smith, Banta, can be seen forging the bell in his home in Truce. Before the Queen is rescued from Manolia Cathedral. Shortly thereafter, the bell is hung as the centerpiece of Leene Square. People whose meeting is heralded by the bell is said to be fated, and has passed into a local legend of the bell's ring being a sign of destiny. Such is the case when Crono meets Marle. At the Millennial Fair in the year 1000 A.D., the very same Fair where Crono and Marle first meet, a young girl further explains that those who hear the bell ring are blessed with happy and fortunate lives. Leene was much revered by her people for her kind and gentle personality, so there is no doubt legends of this sort would be attached to the bell. In a sense, the bell is the very incarnation of Leene. Her hair color is coppery, and her speech mild and pleasant.

In the Present, as the Millennial Fair culminated in the mythic Moonlight Parade which heralds the close of the festival, the then King of Guardia revealed a new bell: Nadia's Bell, in honor of his daughter, the thirteenth known descendant of Leene destined to be Queen. This bell is a silver duplicate of the original.

In one of the many alternate endings of Chrono Trigger, Marle and Crono float away into the sky on the balloons that had held the bell when the King presented it. In another, The King humorously hangs from the archway where the bell is to be hung, expecting assistance with the weighty instrument. Instead of helping him, Marle and the crew head off to the Future to save Crono's Mother who chased her son's Cat into a nearby time gate. 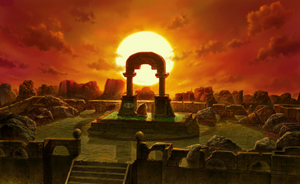 At the center of the Dead Sea lies the crown jewel of Leene Square -- Nadia's bell, dedicated in 1000 A.D. to eternal peace after Crono returned from defeating Lavos. Against a frozen sunset that casts a pale gloom of orange on the scene, the actual bell has fallen off its hanging construction and lies on the ground. An Enertron sits nearby. Miguel waited near the bell, probably because the Frozen Flame of Home World lay behind it. When Serge confronted him, the Ghost Children also appeared, cursing Serge for undoing their efforts to save the world. Eventually, the scene is consumed with the destruction of the Dead Sea.