Dactyls (プテラン, puteran?, Pteran) are a form of transport in the Prehistory era of Chrono Trigger. They are winged reptiles that can be ridden. The chief of Laruba Village keeps the secret to riding Dactyls. 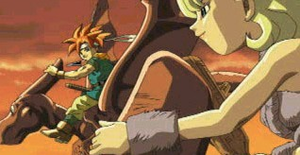 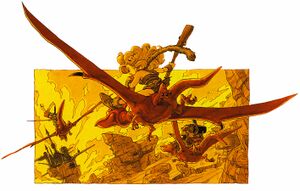 Artwork by Akira Toriyama of Ayla, Crono, and Robo riding Dactyls to Tyranno Lair off in the distance.

When Ayla prepares to assault Tyranno Lair, she uses Dactyls to reach the mountaintop keep. The player is able to use dactyls freely in Prehistory after defeating the Tyranno Lair.

In the game, dactyls function like the Wings of Time (obtained much later) by allowing the player to fly around the world and traverse oceans, mountains, and other barriers they could not cross on foot.