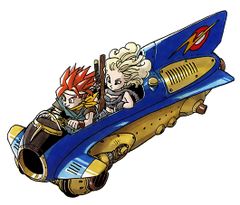 The Jetbike (バイク, baiku, lit. Bike?) is a vehicle in Chrono Trigger, found during the Future. The vehicle levitates above the ground due to an unspecified propulsion system and requires the Jetbike Key to operate. Race statistics are stored in the Race Recorder. Gaining 1500 points in a race against Johnny nets the party one Speed Capsule. Because the Jetbike minigame became popular among players, game designers released the Chrono Trigger: Jet Bike Special as a bonus feature for the Satellaview for the Super Famicon. While using it to race, the song Bike Chase plays.

Retrieving the Seed from the subterranean levels of Arris Dome, Doan awards the party with the key, commenting that he used the bike to traverse the labs when he was younger. Crono, Lucca, and Marle use the bike to race through Site 32 as part of a boss-battle against Johnny, losing the race forces them the re-race the half-motorcycle man. After beating Johnny, he can be raced again as part of an optional minigame.

The player can gain a considerable advantage over Johnny by positioning the Jetbike ahead of him and allowing the rear of the bike to collide with Johnny's head. After gaining a steady momentum (gauged by the bar in the lower lefthand corner of the screen), the player can press "B" to use a speed boost.