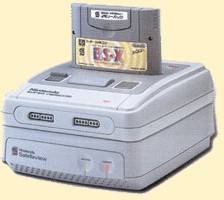 The Satellaview attached to a Super Famicom System.

Satellaview is an accessory attachment for the Super Famicom, released in 1994. Exclusive to the Japanese console, it allowed specific games, not sold by retailers, to be played. The name is a portmanteau of Satellite and view, since the games were viewed via Satellite transmission.