The Epoch (シルバード, shirubādo?, "Sill Bird"/"Silver Bird"), also known as the Wings of Time (時の翼, toki no tsubasa?), is a time-traveling vehicle from Chrono Trigger.

First conceived of by Belthasar, the Guru of Reason, in the Kingdom of Zeal, the Epoch was actually constructed in the far future. A space-time warp in the Ocean Palace tore him away from his home era of Antiquity and deposited him in the post-apocalyptic future ruled by Lavos, some time before 2300 AD. He traveled to the long-abandoned Keeper's Dome in the south and set up a workshop.

Using the knowledge of time travel given to him by Gaspar, the Guru of Time, he began constructing a vehicle that could return him to his own time. He spent the rest of his life building it, but died just prior to its completion. He left the rest up to his robotic assistant, upon whom he had imprinted his personality, to complete the vehicle's construction. 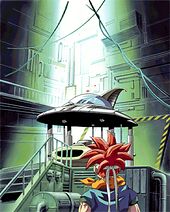 Epoch in the FMV of the PlayStation release.

In 2300 AD, Crono and his companions arrive. They were sealed out of the Antiquity time period by Schala, who cast a barrier spell upon the Gate there. With the princess' powerful magic blocking the only Gate to the era, the party's only way to return is by using the "Wings of Time," told to them by Gaspar. Belthasar, no longer having a use for the vehicle as his life had ended, gives them the Epoch, at which point Crono gives it its new moniker. The ship does not rely on pre-existing Gates to travel, and thus they are able to return and break the seal.

The group uses the ship to return to the Antiquity, confronting Queen Zeal. After the awakening of Lavos and the fall of the Kingdom of Zeal, Crono's companions awaken in the last human village on Earth, Crono having died saving the rest of them from Lavos. The Elder of the village remarks that their ship also arrived on the shores of the village, as though it had followed them, surviving the massive tidal wave caused by Zeal's fall.

Shortly thereafter, Dalton appears and takes the group hostage and steals the Epoch. Dalton, already responsible for the design and construction of the Blackbird, adds retractable wings, weapons, and other systems to the Epoch, intending to use it as his flying chariot and renaming it the Aero-Dalton Imperial.

Destroying the Blackbird, the party reacquires the now-flight-capable Epoch. Using it, they are able to take to the skies, accessing any place in any point in history. The Epoch's flight capabilities also enable them to reach the Black Omen, the floating fortress created from the remains of the Ocean Palace.

The battle with Lavos is also affected by the Epoch. If the group uses it to travel to the Day of Lavos, the outcome changes depending on whether or not it has been outfitted with wings. If it has not, the group disembarks and battles Lavos just the same had they arrived there via a Gate. If it has, the party will use it as a battering ram and slam the ship into Lavos. This destroys the Epoch, but also damages Lavos so severely that the party can move directly to the battles within Lavos, instead of having to fight their way in.

After Lavos' defeat, the Gates close permanently, leaving the Epoch as the only known method of time-travel in existence. Lucca suggests that the group dismantle it. In certain game endings, Crono's mother chases his cat through Leene Square, jumping through the Gate just as it closes. Crono, Marle, and Lucca depart immediately for the Epoch and use it to chase her through time.

The Epoch can access any of the key time eras in Chrono Trigger. The party initially seeks it after being sealed out of the Antiquity time period by Schala, following the advice of Gaspar. It does not rely on pre-existing Gates to operate. 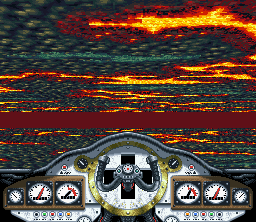 First ride on the Epoch.

Upon getting the Epoch, the player is given the opportunity to change its name and then enter it. Once aboard the Epoch, the player can access the Time Gauge. This gauge dominates the console of the Epoch, and allows the pilot to select a destination time period. While the Epoch is theoretically able to travel anywhere in time, the Time Gauge is locked onto those time periods also accessible via Gates: Prehistory, the Antiquity, the Middle Ages, the Present, the Apocalypse, the Future, and the End of Time.

At first, it operates the same way that the Gates do, depositing the travelers at the same physical location in different eras in time. This limits its use as a spatial transport. As shown in a cutscene, the Epoch possesses engines that cause it to hover in mid-air. The ship creates a time distortion directly in front of it, and the massive rockets at the rear of the ship propel it into the distortion. This has the effect of propelling the ship and its passengers forward, although they do not move in space at all. When the Epoch arrives at its destination in time, the lift engines shut down, lowering the Epoch to the ground in the same physical location.

At a certain point in their adventure, the party loses the Epoch to Dalton. He modifies the ship with technology aboard the Blackbird, giving it the ability to fly. After he is defeated, the party regains use of the now flight-enabled Epoch. Using it, the travelers can access any location in any point in time, which is necessary for certain side quests as well as reaching the Black Omen at any point in history, except Prehistory. 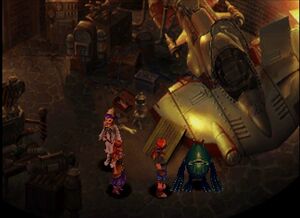 The Epoch as it appears in Chrono Cross in the hidden room underneath Belthasar's desk. The BeachBum resembles the Nu.

In Chrono Cross, one can still find the Epoch in the Dead Sea, dismantled and destroyed. Additionally, a ruined flying vessel is found in the secret chamber beneath Belthasar's desk in Viper Manor, with a BeachBum guarding it. Not only is Belthasar the creator and keeper of the Wings of Time, but a Nu guards it prior to his death. Startling similarities have been drawn between Nu and BeachBum.