"It is pure potential. By unleashing a specific course of events, it can have a powerful effect on time."
— Gaspar

The Chrono Trigger (also known as C. Trigger in the SNES/PS version), or the Time Egg (時のたまご, toki no tamago?) as it is known in Chrono Cross is an important egg-like item that appears in Chrono Trigger, Chrono Cross, and Radical Dreamers. Its very shape is a metaphor for possibility.

In Chrono Trigger, the Chrono Trigger is an egg-like item given to Marle and her party by Gaspar to help bring Crono back to life after he is killed by Lavos. Gaspar says that the egg has the potential to revive Crono. He also says that to hatch it, you have to treat it like an egg, though like an egg, it may or may not hatch.

Afterward, the party travels to 2300 A.D. and talk to Belthasar. He reveals to them that Death Peak has the power to restore life. However, he says that the "deceased must be important to the space-time continuum" and that they must have a clone identical to the deceased person. He also tells them that the magician, Norstein Bekkler, can make clones and hint that he is at the Millennial Fair.

The party then travels to Present and find Bekkler at the fair. They play a game and depending on how long they stay in it, the price for the clone will be lowered. They eventually win the game and the clone of Crono is brought to Crono's House. So the party ventures to his house, takes the clone, and head to 2300 A.D. to the Keeper's Dome. 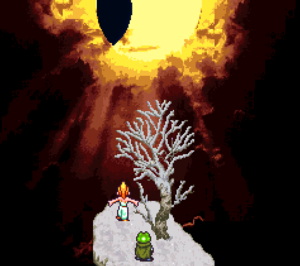 After the Chrono Trigger shatters, an eclipse occurs atop Death Peak.

At the dome, Belthasar tells them they must next go to Death Peak. He brings out a Nu that had its memory banks implemented with a program that will help them climb the mountain. Three Poyozo Dolls fly out of the Nu and head to Death Peak. Belthasar's message ends and asks that they shut off the Nu, which they do. They then head to Death Peak.

They travel to the mountain and climb it with the aid of the three entities from Belthasar's program. Along the way, they overcome various monsters and Lavos spawns. When they reach the summit, they release the Chrono Trigger. Marle's pendant reacts to the egg and sends power to the egg. Eventually, they pop up where they fought Lavos just before Crono was killed, though time has been frozen. They replace the clone with Crono, who suddenly starts moving, making the mission of reviving Crono a success.

In Chrono Cross, it is called the Time Egg (時のたまご, toki no tamago?), and it has the power to grant one mobility between Opassa Beach and the Darkness At The End Of Time to fight the Time Devourer.

During the confrontation with Lynx, the party discovers he has lured them into Viper Manor to unite the Chrono Trigger with the Frozen Flame. Brutally damaged in the fray, Kid asks Serge if she should give the item to Lynx or refuse. Either way, she breaks the device and sends the party into an alternate dimension, not unlike the End of Time, where she remembers that she is Schala and the meaning of her incarnation. The Chrono Trigger was given to Kid by, Lucca, her sister. It is specifically referred to as "Chrono Trigger".