Pendant is a Key Item in Chrono Trigger. It is in the possession of Marle at the beginning of the game and is found to be a very important artifact throughout the timeline.

The pendant is a piece of technology from the Kingdom of Zeal. It was used by Schala to control the Mammon Machine as well as other pieces of Zeal technology. The manner in which it came into possession of Marle is a point of contention, but it either:

The Pendant as it appears in the FMV of the PlayStation release.

The importance of the pendant came into play at the Millennial Fair in 1000 A.D. It reacts to the space-time distortion field caused by the Telepods created by Lucca, opening a Gate through time and sending Marle 400 years into the past, leaving the pendant on the Telepod floor. Crono takes the pendant and journeys into the past to rescue her. The Pendant allowed Gates to open and be safely traveled through. Without intervention from the Gate Key, Magic, or some other form of undiscovered technology, time-travel through these Gates would not be possible.

Crono is accused of stealing Marle's Pendant if he snatches it up before making sure Marle is unhurt in the Millennial Fair after they bump into each other and before she is transported to the Middle Ages. Also, Melchior asks Crono to convince Marle to sell her pendant to him at the Millennial Fair in 1000 A.D. If Crono agrees (although the pendant will never be sold to Melchior) it will be used as evidence against him in the trial for Marle's alleged kidnap. The fact that Melchior asks for the pendant indicates that, after he was cast out of Zeal after the events at the Ocean Palace, he was aware that the Princess's necklace would transport him back to his own time so he could prevent Queen Zeal from exploiting Schala's power and ultimately harnessing the power of Lavos. Because he was aware of this, it is likely that he played a role in either its creation or how it moved from Schala's hands to that of the Guardia Royal Family. The "stealing" of the Pendant and the "attempt to sell it" sway the jury in Crono's trial for the apparent abduction of Princess Nadia.

Kid, as a baby, wearing Schala's Pendant, in the FMV of Chrono Trigger.

Pendants open Sealed Doors and Sealed Chests throughout time. These are Zeal technologies that survived the Fall of Zeal. Inside or beyond them are rare and useful items. Most notably are vests that absorb color magic. First, Crono must charge the pendant using the Mammon Machine while it still resides in Zeal Palace. Charging the Pendant also grants access to the Throne Room of Zeal Palace. 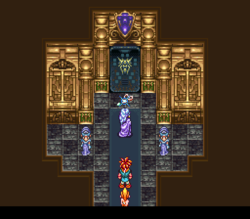 Schala uses the Pendant to unlock a Sealed Door in Zeal Palace.