"But Gates are unstable-that's why they appear and disappear all the time. So I used the principle behind my Telepod device...to create this Gate Key! It's what's locking the Gate in place. "
— Lucca talking to Marle about the Gate

Gate Key (ゲートホルダー, , Gate Holder?) is the device Lucca invents in Chrono Trigger. It is used to travel through time via the Time Gates.

Lucca explains that the device does not itself allow the party to time-travel. Instead, the Gate Key stabilizes pre-existing temporal anomalies, creating the temporary passages that the party uses to cross from one era to the next. The exact manner that Lucca achieves this technological wonder is never clearly explained; however, it is possible that Lucca's work on the Telepod gave her insight into the science of dimensional and temporal teleportation. The Gate Key is arguably the most powerful of Lucca's inventions. 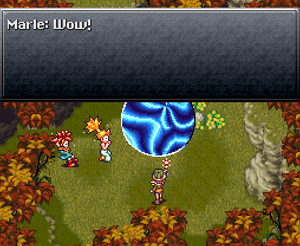 The first appearance of the Gate Key.

During the events in Prehistory surrounding the party's search for the Dreamstone, the Gate Key is lost, leaving the party stranded until it is recovered. After the great feast which won Crono the rare red mineral, Kino, mate of Ayla, stole the device while the party slept. Hunting him down, they discover him in theForest Maze, moping. It is learned that Kino stole the device out of jealousy for the attention his mate showed Crono, but the device was stolen from him by the Reptites.

It is found in the possession of the Reptite Queen, Azala. She does not believe that it could have been created by any of the 'primitive' humans and believes its power will give her an upper-hand in her battle against mankind. After the defeat of Nizbel, Azala's champion, she angrily returns the Gate Key, vowing revenge on Crono and his allies.

In one of Chrono Trigger''s many endings, if the Epoch has been destroyed, the party leaves Present using the Gate Key.