"After all that girl is our Princess Nadia. Marle, that is Princess Nadia, is a descendant of Queen Leene. "
— Lucca talking about Marle's secret

Marle (マール, Māru?, "Marl" in Japanese media) is a character in Chrono Trigger. She is the tomboy princess of Guardia. Her real name is Nadia (マールディア, Mārudia?, "Marldia" in the Japanese version), and she is often at odds with her father, the king. Born in 984 A.D., Marle was 16 years old when she met Crono in 1000 A.D. She is characterized as vivacious, optimistic and strong-willed. Marle uses a crossbow as her weapon; when she gains the ability to use magic, she learns to use the "Ice" elemental and very powerful healing spells. Later in the game, an optional sidequest fleshes out the troubles between Marle and her father.

Marle has medium-length blond hair that is tied into a high ponytail, she wears a white tanktop and a pair of white pants, along with a crossbow, a gold chain, golden bracelets, and dark brown sandals. As the Princess of Guardia, she wears a light-green dress with white gloves. Frog mentions that Marle bears an "uncanny" resemblance to Queen Leene, her ancestor from the Middle Ages. Marle's original character concept included a much shorter version of her current self. Her hair was also much shorter, and she was intended to be the daughter of a Fairy King.

Marle with her crossbow in the FMV of the PlayStation release.

Bored of royal life in the castle, she slips out to the Millennial Fair held at Leene Square in Truce. Here, she meets Crono but conceals her royal status from him. As the two enjoy the many games and foods at the festival, namely lollipops, which are her favorite, Marle tries out Lucca's Telepod, which reacts with her pendant and creates a time warp (called a Gate), sending her to 600 A.D. Using her pendant, Crono travels back in time to rescue her. Shortly after arriving in Truce Canyon, Marle is either confronted by a search party or arrives at the Middle-Ages version of Guardia Castle and is mistaken for her ancestor, Queen Leene, due to their parallel features and personality. Marle, quite humored by the misconception, plays along until Crono finds his way into the castle. Marle does not reveal her identity immediately to Crono, but instead seeks an audience with him in the castle's private chambers. There, she reveals her identity. As the two are talking, a glowing green aura encompasses Marle and she evaporates in a spray of sparks. Stunned, Crono flees the room, bumping into Lucca in his haste. Finding her way to him via the Gate Key, she explains that Marle is, in fact, a Princess from their own time period and she realizes that this time period's kingdom has mistaken Marle for her kidnapped ancestor. Marle's ancestor, Queen Leene, went missing many days prior to Marle's arrival in the Middle Ages. A search party was called to find and rescue the Queen, but as Marle intervened in this time period and was mistaken for Leene, the search party was called off. Thus, the King and Queen did not produce an heir that would later mother Marle and created a grandfather paradox. Shortly after, the two hear the Chancellor mention that Queen Leene is hidden inside the Manolia Cathedral, west of the Castle. 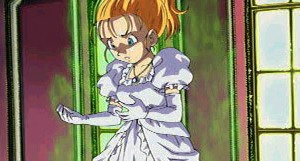 Marle, impersonating Queen Leene, is unborn in the FMV.

To fix the timeline and bring Marle back to life, the two infiltrate the Cathedral, which is overrun by strange creatures and rescue Leene from Yakra who impersonated the royal Chancellor and held the Queen hostage in attempts to terrorize the monarchy. Marle, Crono, and Lucca return to their proper time period only to learn that a search party was called to find Marle, who was believed kidnapped by Crono. Using her authority, Marle demands the guards unhand Crono, but the Chancellor (of this time period) quickly overrules her. Placed on trial, Crono is accused of abducting Marle in attempts to thwart the throne, very similar to the event he attempted to resolve four hundred years in the past. Many scenes from the Millennial Fair play a role in this trial, but despite the verdict, Crono is imprisoned, pending execution.

Lucca busts him out of jail and together they flee the Castle. Marle meets up with them and together, they take off for Guardia Forest, chased by Royal Guards and the Chancellor. A Gate awaits them in the forest, and they use it to travel thirteen hundred years into the future. After the team investigates Trann Dome, looking for a portal to take back to their proper time period, Robo joins the party. From this point forward, Marle's role in the story is optional. The player can decide to involve her or not. Including her introduces a plethora of different dialogue.

The wedding of Crono and Marle in the FMV.

After the legendary Rainbow Shell is retrieved from Giant's Claw and stored in the Castle Vault, Marle's Father, King Guardia XXXIII is accused of selling the heirloom which was scheduled to be unveiled at the Moonlight Parade as stated in an ancestral will. The King claims he was not aware the artifact even existed. Marle, to prove her father's innocence, locates the shell in the basement of the Castle and brings a shard of it to the courtroom. The Chancellor, impersonated by Yakra XIII, attacks the party for ruining his scheme to usurp the throne. After he is defeated, the King and Marle share a touching scene where the King reveals hidden facts about the day her mother, Queen Aliza, died of a fatal illness. For the first time in years, Marle calls her father "daddy", and their problems are reconciled. The PlayStation version of Chrono Trigger includes an FMV scene at the end that shows Crono and Marle getting married. While a second FMV depicts the Fall of Guardia in the year 1005 A.D., it is unknown what happened to Marle during this event, although if Doan is her descendant, she probably survived. In the sequel, Chrono Cross, Marle's fate is hinted at in Radius's statement about the Kingdom of Guardia no longer being peaceful; she makes a cameo appearance alongside Crono and Lucca as apparitions at the Dead Sea and Opassa Beach.

Marle has the best healing techs out of any character in the game. She can easily cure to full health and bring characters back to life with full health too and can also cast Haste on one ally. However, her inability to heal multiple party members without the assistance of another party member is a notable weakness. She also has a nice array of good double and triple techs too. Unfortunately, she cannot take much damage or dish out much outside of techs.

As Marle's element is ice, she takes extra damage from fire attacks.

While Ayla is the quintessential thief-type character of Chrono Trigger, Marle can assist Ayla with stealing by utilizing their dual-tech Twin Charm.