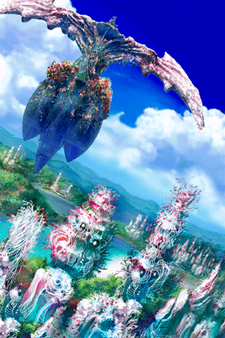 It essentially serves as the final dungeon of the game prior to the last boss, and contains many items in chests which can't be found anywhere else - note, however, that this location cannot be revisited once it has been completed.

The tower arises after the events at Chronopolis; but it isn't possible to enter the tower itself until Starky has been taken to his ship in Another World's El Nido Triangle (if Starky hasn't been joined the party yet at this time, it will be necessary to do so). When this has been achieved, Starky will attach an anti-gravity device to Korcha's boat; allowing Serge and party to enter the tower at any time by simply

Once the last boss of Terra Tower (the Time Devourer (Terra Tower)) has been defeated, it will no longer be possible to enter this dungeon.

The Tower had its origins in Dinopolis, the ancient city of the Dragonians. Constructed as one of the ultimate achievements of Dragonian culture, it was created for living and the housing of the Dragon God, a sentient creation that could control nature and harness the power of the planet. Presumably in 2400 A.D. in the Reptite Dimension, Dinopolis was pulled out of its home world and into the Keystone Dimension by the planet to act as a balance against Chronopolis, which had just been introduced into the past history of that dimension by the Time Crash. A war ensued with the Dragonians fighting against the Humans of Chronopolis; eventually, Chronopolis prevailed, and the Dragon God was taken and divided up into six derivative beings meant to represent forces of nature. The surviving Dragonians exited Dinopolis, which was brought down by Chronopolis and submerged beneath the sea of El Nido. The top was subsequently decorated with greenery and plant life, and served as the home of the Sky Dragon. Dinopolis then lay dormant for thousands of years. In 1020 A.D., when Serge defeated FATE at the Sea of Eden, the Dragons united to form the Dragon God once more, and stole the Frozen Flame. They then raised Terra Tower from the ocean floor; it took on a ghastly appearance, and was filled with demons and malevolent beasts. Six elemental fighters were also installed to keep out Serge or any other challengers.

Notwithstanding the defense mechanisms, Serge used Starky's antigravity device to fly up and raid the tower. Along the way, he found a strange doorway apparently leading to Viper Manor; it was an illusory area created by Belthasar. Belthasar explained to Serge his purpose, while the Ghost Children asked whether Serge had obtained the Chrono Cross yet. Moving on, he deactivated each seal guarded by the elemental fighters, and eventually surmounted the tower, where the Frozen Flame lay. A battle with the Dragon God ensued; Serge was able to defeat the beast. This caused the tower to undergo a huge transformation as it sunk and crashed into the sea; it morphed into a giant statue of what may have been a Dragonian.