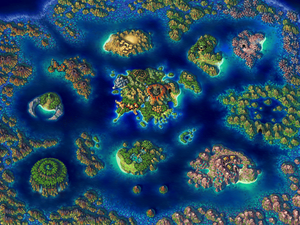 El Nido (The Nest In Spanish) (エルニド諸島, El Nido (The Nest In Spanish)?) is the name given to the archipelago situated in a sea encircled by rocks far from the Zenan mainland. Originally, it was simply a sea; no islands existed within the sea save for Gaea's Navel. After 2300 A.D., Belthasar located Chronopolis there and constructed the time fortress under the wing of the Central Regime. Specifically, it was built in a subsection of the sea known as the Sea of Eden. There, Project Kid was developed and the FATE supercomputer was constructed and powered by the Frozen Flame. In 2400 A.D., the Time Crash hurled Chronopolis fifteen-thousand years into the past. FATE, desirous of creating its own paradise, began the process of terraforming several new islands in the sea. These included Earth Dragon Isle, Guldove, Hermit's Hideaway, Isle of the Damned, Main Island (Fort Dragonia, Arni, and Termina), Marbule, Sky Dragon Isle (actually Dinopolis ruins), and Water Dragon Isle.

The Dragon God's components were also installed at six locations around El Nido. After terraforming was complete, Chronopolis dispatched some if its workers to populate the islands, and also set up Records of Fate, which would allow the FATE supercomputer to control the lives of its inhabitants in order to minimize contact with the outside world. Dragonians also settled in the area, having survived the war with Chronopolis; they began creating Elements and other establishments. FATE's purpose was defeated, however, when mainlanders from Zenan discovered and colonized the area, establishing the town of Termina and dispersing throughout the isles. The Dragonians soon became extinct, and the cultural tradition of El Nido was pushed out to Marbule and Guldove. The real purpose of El Nido, however, was divined by Belthasar; the Guru planned for its creation and the birth of a boy named Serge in Arni. The actions surrounding him would split the dimensions, and components of the Dragon Tear (a Dragonian relic) would be fused to form a special Element called the Chrono Cross that could free Schala from the Time Devourer. Apparently, Belthasar felt it needed to create the civilization of El Nido to accomplish his objectives. In any event, El Nido added a singularly unique contribution to the world.