Gonji (ゴンジー, Gonji?) is a minor character in Chrono Cross. He is an old man who appears in Arni in both worlds.

In Home World, he appears early in the game in the backyard of the village chief's hut where Radius is giving out seminars on Elements. Gonji boasts to Serge that his knowledge is just as great as Radius's, and procedes to offer players a brief tutorial on how to use key items on the field to show/give them to other characters using the square button.

In Another World, by contrast, he serves as the village chief of Arni, replacing Radius who is the chief in Home World. Unlike Radius, whose seminars draw a great deal of attention from both local town folk and outside visitors alike, Gonji prefers to keep his work as village chief simple and without any unnecessary frills or extravagances. 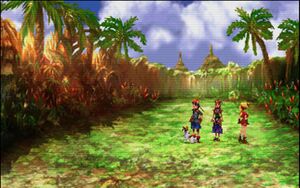 In contrast to the hustle and bustle that surrounds Arni village's chief Radius's lectures in Home World, in Arni (Another World) Gonji's backyard is completely empty save for a stray cat, showing the difference in how the two village chiefs choose to run the village