Isle of the Damned 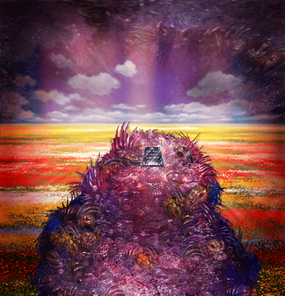 Isle of the Damned (亡者の島, , Mouja no Shima, lit. Island of the Dead?) is a location in Chrono Cross. It is the burial place of Garai, the 13th Grandmaster of the Acacia Dragoons.

When it was created by Chronopolis, it was peaceful and bright, like the island Hermit's Hideaway was built at; however, once Radius lay his dead friend there after accidentally killing him while consumed with the Masamune, the island grew dark and corrupted. This was the result of Garai's emotions; undead beasts and bones soon proliferated throughout the isle, which took a dark hue and contaminated the water around it to black. The island would go untouched afterward until 1017 A.D. in Another World; in that dimension, Karsh and Dario were assigned a mission to defeat enemies there. While exploring, Karsh found the demonic Masamune; when Dario took hold of it, his mind became corrupted and he attempted to kill Karsh. A struggle ensued in which Karsh killed Dario. Rumors spread wildly about Karsh supposedly killing Dario for becoming engaged to Riddel; three years later, the Shaker Brothers publicly invited Karsh there to find the truth. They battled him, but Karsh proved his innocence; the party then departed the area.

In Home World, after the doomed expedition to the Dead Sea took place and killed the Acacia Dragoons, the Einlanzer was laid to rest beside Garai by Radius. The view beyond his grave strangely become a vision of fields of petals and flowery expanses, said to represent Garai's dreams. His negative emotions still seethed; strange, mirror-like seals formed over the cavern openings deep in the isle. In 1020 A.D., Radius told Serge that he required the Einlanzer to thwart the Masamune's evil power at Death's Door. Radius confronted Garai's spirit, which appeared when he attempted to take the sword. Radius defeated his old friend, and Garai was laid to rest; Steena came by days later and noted that she would fall heir to Garai's dream. The vision of the flowery fields persisted.