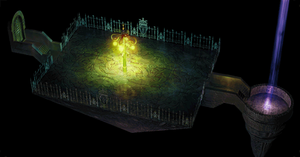 The Bend of Time (次元の狭間, , Jigen no hazama, lit. A Narrow Space Between Dimensions?) is a dimensionally transcendent place where one can access monsters from various stages of Chrono Cross. It is believed to behave like a Pocket Dimension. It's staffed by two Octo monsters, probably meant to represent Gaspar and Spekkio, and features architecture that resembles the End of Time.

In addition to the Gates allowing battles with former enemies, the Bend of Time is also home to the Mystical Knights (Ozzie, Flea, and Slash), who reside in a room only accessible on a New Game +. They can be fought; after their defeat, the "Spekkio" Octo will allow Serge to perform a trial to receive a Dreamer's Sarong item. The competition involves running around the room a certain number of times that matches up with a number "Spekkio" is thinking of. This is reminiscent of the trial Crono and his friends had to complete to receive Magic.

How to Enter The Bend of Time[edit | edit source]

The Bend of Time is located on the small island in the middle of this image, sandwiched between the main continent of El Nido to the northwest and the island containing Marbule to the southeast.

The Bend of Time can first be accessed once the Porre boat has been acquired from Termina in Home World, but it is somewhat hidden as it is located on a small, unmarked island between the main human-populated El Nido island and Marbule. To enter, simply press the confirm button while near this island, and the party should enter automatically (it may require some trial and error and mashing the button). Once the island has been entered once, the island will be marked with a "Bend of Time" title on the map once the party approaches this island, much like every other important location on the world map. The Bend of Time can be accessed in the same manner in either Home or Another World.

From a gameplay perspective, the Bend of Time is most notable for being a good area to capture monsters for use in Sprigg's Doppelgang and the Grand Slam tournament. Some of the monsters here aren't available to capture anywhere else, due to the fact that they are encountered before Sprigg joins the party, and cease to show up by the time Sprigg does join. For example, this applies to many of the enemies found in Viper Manor (Another World), such as the Portalgheist. Unfortunately, there are eight capturable Doppelgang enemies which do not appear in the Bend of Time - they are listed in their own separate section of the article.

To fight monsters in the Bend of Time, simply step on the Gate you wish to use and a sound resembling a ringing bell should be heard. Stand still once this happens and press the confirm button (the process is similar to when using a Save Point). Once the battle has been won (or fled from), simply press the confirm button again to fight more enemies if you wish; if you're done fighting enemies, simply move off of the gate.

On the first playthrough, there is a mysterious locked door which cannot be opened. As mentioned in the header of this article, the three Mystical Knights (Ozzie, Flea and Slash) can be found behind this door, which is only unlocked on New Game +.

The Bend of Time is also notable for being where Janice's level 7 tech What'sUpDoc is found. To get it, simply talk to the Octo with Janice in the party.

This Gate leads to Chronopolis and areas in the Sea of Eden.

This Gate leads to the Dead Sea.

This Gate leads to Shadow Forest and Fossil Valley.

This Gate leads to Cape Howl and Lizard Rock.

This Gate leads to Terra Tower and Lucca's House.

This Gate leads to Mount Pyre and the Isle of the Damned.

This Gate leads to Fort Dragonia and the Temporal Vortex.

There are several other monsters and bosses which do not appear in the Bend of Time, but as they are not Doppelgang-able, they are not listed here.

To some degree this area acts as a sound test, as the regular battle theme Gale, does not play during the battles here. Instead, the music is randomly chosen from a selection of themes associated with that area's gate.