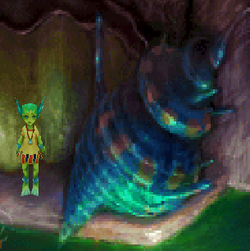 Demi-humans (亜人, ajin?) are a sentient, humanoid race in Chrono Cross. Believed to be the evolved hybrids of Dragonians and Humans, this species possesses a wide range of physical features with running trends and subspecies. The only common feature linking them together is their apparent physical "deformities" that deviate from Humans. Because of these alleged abnormalities, many Demi-humans are fearful and resent Humans. Fixed in an anti-human ideology, Demi-humans deviated from their traditional homes to Marbule, an island southeast of Termina, and human presence is not encouraged. A civilization containing Demi-humans and humans alike is Guldove. A colony of fairies, which are considered Demi-humans, exists on Water Dragon Isle.

Characters such as Nikki and Marcy have Demi-human blood, albeit they are still considered humans. Because of this, it can be inferred that Demi-humans and Humans have similar DNA, allowing them to successfully interbreed.

While the only shared trait of Demi-humans is their semi-humanness, there seems to be specific types or "subspecies" of Demi-Humans, all of which are sentient and mostly bipedal. The first subspecies includes a furry, feline-esque variation which is very robust and strong. Many of this type are seen hauling burlap sacks at the docks of Termina. The second subspecies includes a variety strongly resembling meerkats. They have tiny, pinched faces, big ears, and tails with colored ornaments on the ends. Seen as merchants and assistants, this branch seems mostly to include females members. Doc, in Guldove, employs one such Demi-human as a nurse. The third subspecies includes mermaids, blue-scaled females adept at swimming and magic-use. Fourthly, a subspecies bearing insect wings, large eyes, and antennae about the head also appear in Marbule and Guldove. Other subspecies of Demi-humans exist in El Nido and bear various degrees of amphibian traits. 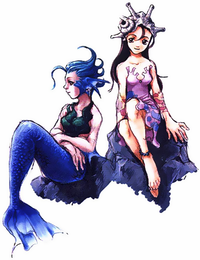 Before Viper Clan migrated from Zenan and settled the El Nido mainland, Demi-humans flourished on the tropical archipelago of the El Nido Sea. Easily, they found work and adopted niches harmoniously as FATE intended. Many worked as captains, merchants, and dockworkers at this time.

When humans finally colonized the mainland, their hatred and greed drove the Demi-humans from their home to Marbule, where a deep prejudice was gained and spread to proceeding generations. Demi-humans that remained in the newly invaded territory were kept for manual labors; dockworkers were needed to maintain the ports of Termina. The residence on Marbule succeeded in its intentions of isolating itself from the mainland until Fargo, captain of the S.S. Zelbess, married a mermaid named Zelbess in 1000 A.D. Seeing that romance could exist between Demi-humans and humans, a new ideology of tolerance emerged, only to be quickly shattered when Zelbess was murdered by the Acacia Dragoons due to an event involving Serge eleven years later.

The fate of Demi-humans splits here between the dimensions of Another World and Home World. In Another World, Demi-humans remain prejudice against humans for almost a decade, although they allow humans into their settlements. In Home World, the Demi-humans are driven from Marbule by the Black Dragon. Several accept positions as sailors aboard the S.S.Zelbess with Fargo and are exploited as physical laborers. Both histories are grim for the Demi-humans until Nikki, a rockstar, ventures to the island in search of the Sage of Marbule and ultimately the Song of Marbule. This precious hymn is imbued with the power to drive out the Black Dragon and a subsequent concert unfolds where the song is played and the Demi-humans are rescued from it. After this event, Demi-humans repopulated Marbule, alongside humans, where a new, more tolerant culture persists.

The prefix Demi- means "half" or "partially". Juxtaposed by the word human, the name implies that this race is part human, part something else.