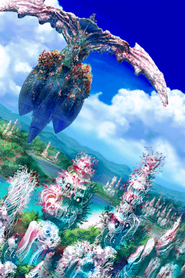 Dinopolis (ディノポリス, , Dinoporisu?) is a location in Chrono Cross. It was a metropolis built by the Reptites in a timeline where Lavos never arrived and they became the dominant species of the planet, ultimately evolving into the Dragonians. Dinopolis housed the Dragon God.

After the Time Crash, it was pulled into the regular timeline's Antiquity. A war between Dinopolis and Chronopolis ensued, leading the city to get ruined and ultimately abandoned, with the surviving Dragonians fleeing to the El Nido islands. The site is now home of Terra Tower.

This article is a stub about a location. You can help Chrono Wiki by expanding it.
Retrieved from "https://www.chronowiki.org/w/index.php?title=Dinopolis&oldid=45224"
Categories: