Radical Dreamers: Nusumenai Hōseki (ラジカル・ドリーマーズ -盗めない宝石-, Rajikaru Dorīmāzu -Nusumenai Hōseki-?, literally Radical Dreamers -The Jewel That Cannot Be Stolen-) is a Japanese video game produced by Squaresoft in 1996 for the Satellaview add-on for the Super Nintendo Entertainment System. It is a text-based adventure game in which the player takes the role of Serge, a young adventurer accompanied by Kid, a teen-aged thief, and Gil, a mysterious masked magician.

The game is part of the Chrono series and is a side story to Chrono Trigger, released to complement its predecessor's plot, and later serving as inspiration for Chrono Cross. It features text-based gameplay with minimal graphics and sound effects, and was scored by composer Yasunori Mitsuda.

Radical Dreamers and other Satellaview titles were planned to be released at the Akihabara electronics district of Tokyo. Square also tried to integrate it into the Japanese PlayStation port of Chrono Trigger as an easter egg, though writer and director Masato Kato halted both releases as he was unhappy with the quality of his work. Though the game was never officially released abroad, ROM hackers completed an English fan translation in 2003.

Gameplay of Radical Dreamers consists of text-based scenarios presented to the player through the narration of the main character, Serge. As the narrative progresses, the game presents a list of possible actions and the player must choose his or her course. Depending on the choices made, the player may enter a new area, be presented with a new situation or character, or have to choose again if the previous selection was incorrect. In combat with enemies, the player must select from options such as "Fight", "Magic", "Run", and often more complex situational commands like "Run my knife into the goblin's chest!" or "Quickly slash at its hand!". Some decisions must be made before an invisible timer runs out; in combat, hesitation results in injury or death. Serge's health is tracked by an invisible point count, restored by various events such as finding a potion. The game also tracks Kid's affection for Serge, influenced by battles and scripted events. Her feelings determine whether Serge survives the story's climactic fight.

The game features minimal graphics and animation; most areas are rendered with dim, static backgrounds. The game also uses atmospheric music and sounds. Like other Chrono games, Radical Dreamers contains a variant of the New Game + mode. Only one scenario is available on the first play-through; after finishing it and obtaining one of three possible endings, players can explore six others. These later stories often feature comical situations or allusions to Chrono Trigger.

Radical Dreamers features three protagonists, Serge, Kid, and Gil, who seek out treasure as venturesome, reputable thieves. The young adult narrator, Serge, is a drifting musician who met Kid by chance three years ago in a remote town. Serge enjoys adventure with a carefree attitude. Kid, only sixteen years old, is a renowned professional thief with a reputation for boisterous behavior. Possessing a turbulent history, Kid dubiously fancies herself as a kind of Robin Hood. Gil is an enigmatic, handsome masked man skilled in magic who rarely speaks and can fade into shadow at will. Crowned by flowing, blue hair, Gil accompanied Kid well before Serge joined the group. They seek the Frozen Flame, a mythic artifact capable of granting any wish. It is hidden in Viper Manor, the home of a terrible and powerful aristocrat named Lynx, who gained control of the estate after usurping power from and killing the Acacia Dragoons, a familial unit of warriors. 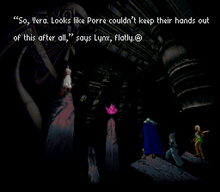 The party confronts Lynx near the Frozen Flame

Following Kid, the group infiltrates Viper Manor on the night of a full moon. While sneaking through the corridors, they battle goblins and other creatures of legend while unraveling the history of the manor and its occupants. Gil explains that the Frozen Flame is a fragment of the massive, extraterrestrial creature known as Lavos, splintered off when Lavos impacted the planet in prehistory and burrowed to its core. The thieves locate Lynx and the Frozen Flame deep within an underground ruin of the Kingdom of Zeal, an ancient, airborne civilization destroyed after it awakened Lavos in search of immortality. Serge discovers that Kid is an orphan, hoping to exact revenge upon Lynx for killing her caretaker, Lucca. Kid attempted to find Lynx in her childhood after Lucca's death, but was stopped and saved from certain defeat by Gil, who accompanied her thereafter.

The trio battle Lynx for the Frozen Flame, and Lynx gains the upper hand after trapping Gil with a powerful spell. He plans to acquire Kid's special gift from Lucca, a Time Egg, or Chrono Trigger. With a Time Egg and the Frozen Flame, Lynx boasts that he shall achieve control over time. Kid lunges at him, but Lynx easily parries her attack and wounds her. She desperately removes the Chrono Trigger from her back pocket. The Trigger shatters and causes a localized temporal distortion, leading Serge to see various scenes in history. Kid learns of her heritage as princess Schala of Zeal, a meek girl who was coerced to help awaken Lavos with her magical power. As Zeal collapsed, Schala was wracked with anguish and guilt for her role in the incident. Nearby in the Ocean Palace, the Frozen Flame felt her grief and changed her to a baby, sending her to the modern era where Lucca found her. It is also circumstantially revealed that Gil is in fact Magus, Schala's wayward brother who searched for her after battling Lavos in Chrono Trigger. Once the distortion subsides, an army from Porre, a large nation in search of the Frozen Flame, storms the mansion. Lynx withdraws as Kid, Serge, and Gil flee. Kid tells Serge that she is aware of her true origin, and knowing that is a treasure which cannot be stolen. She bids him goodbye before disappearing into the darkness with Gil.

Other scenarios are available after players complete the first. These include both humorous and serious variations of the main plot.

Masato Kato wrote Radical Dreamers after Chrono Trigger was released, feeling that the game concluded with "unfinished business". He composed the main story and drafted the concepts for the sub-scenarios, leaving them to be completed by his peers. He allowed Makoto Shimamoto to write the entire Kid and the Sunflower segment, later joking that he "avoided having any part in that episode." Kato remarked that his "savage feelings" from the hectic development of Chrono Trigger, manifested in Kid's "unusually nihilistic attitude".

Kato's team completed Radical Dreamers in only three months under a rushed production schedule, prompting him to label the game "unfinished" in an interview for the Ultimania Chrono Cross guide.

In April 2003, the ROM hacking group Demiforce released a fan translation rendering Radical Dreamers in English. The patch works by modifying the ROM image of Dreamers used for playing console-based video games on personal computers through emulation. The ability to save games was not enabled with the first patch, and some minor typos were left in, later remedied by successive releases.

On Christmas Day 2005, Demiforce and Radical R released the final version (1.4) of the translation, which fixed remaining minor bugs. The French team Terminus Traduction made a French translation patch soon after.

A reviewer for Home of the Underdogs lauded the game's excellent writing and the "superb" English translation patch, noting that the "interesting plot" would appeal to fantasy fans if they could stomach the limited interactivity. Having never played a Chrono game prior, the reviewer stated, "I was still able to follow the story and be drawn into the world of colorful characters." While praising the replay value afforded by the extra scenarios, the critic derided the random battles of Radical Dreamers, writing that "RPG-style random combat doesn't translate well to [a] text-only medium." The website awarded Dreamers "Top Dog" status, and the game maintains a voter score of 8.95 out of 10.

Radical Dreamers preceded Chrono Cross, a full RPG sequel to Chrono Trigger. Masato Kato cited the desire to "redo Radical Dreamers properly" as the genesis of Cross, attributing the latter's serious atmosphere to the influence of Dreamers. Chrono Cross borrowed certain thematic elements, story points, characters, music, and objects introduced in Radical Dreamers, including the infiltration of Viper Manor, the Frozen Flame, the name Radical Dreamers for Kid's thievery, and the characters of Kid, Lynx, and Serge who became a non-speaking protagonist. Though these characters and items were not presented in the same context, their general traits survived the transition. Gil, confirmed by Kato to be Magus, was also going to be featured in Chrono Cross. This idea was scrapped due to difficulties in representing the story of Magus among the game's numerous other characters; the unrelated, enigmatic magician Guile was created instead. Since the release of Chrono Cross, Radical Dreamers is no longer part of the official continuity of the Chrono series. Chrono Cross addressed this through an easter egg hinting that Radical Dreamers took place in a different dimension. In the English version of Chrono Cross, this easter egg refers to Gil as "Magil". A new Chrono series game has not been made due to the difficulty of reuniting the Cross development team, which continues to update Final Fantasy XI. Composer Yasunori Mitsuda stressed that "there are a lot of politics involved" in the creation of a new game, and that Masato Kato should participate in development.