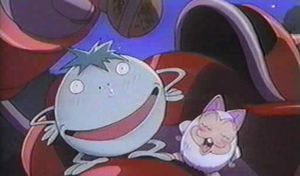 Nu on the left, Mamo on the right, and Gonzalez (Gato) in the background.

Dimensional Adventure Numa Monjar (時空冒険ヌウマモンジャ～, Jikū Bōken Nūmamonjā?, lit. "Time and Space Adventures: Numa Monjar") is a 16-minute humoristic and promotional Chrono Trigger anime which was broadcast at the Japanese V-Jump Festival of July 31, 1996. It was created by Production I.G, and written by Hiroshi Izawa and Akihiro Kikuchi, while Itsuro Kawazaki served as director, Tensai Okamura as animation director, and Riho Nishino as character designer. It was never commercially released.

The anime takes place in the same setting as Chrono Trigger, the night before the beginning of the game's events. The empty Millennial Fair is infested by a festive gathering of monsters coming through portals. The two protagonists, a Nu and a Poyozo Doll named Mamo, try to recruit members for their group "Nuumamonjaa". Finding no one willing to join them, they wander the fair and interrupt the robot Johnny's show.

Later, Nu enters a drinking contest and wins a golden shovel, with the help of a controller that resembles that of a Super Famicom. Nu goes into the bushes after the contest to urinate, and stumbles upon Gonzalez (Gato in the English version of the game). Gonzalez activates and chases the group, while singing his line from the game: Aa Gonzaresu. Ore-wa tsuyoi. Ore ni kattara shirubaa pointo ("Ah, Gonzalez. I am strong. Beat me up and get silver points").

Eventually, Nu and Mamo end up on Gonzalez' back as he runs uncontrollably, entering a race against Johnny. In an attempt to stop Gonzalez, Nu presses a large button on Gonzales' back, which causes a large boxing glove on a spring to hit Johnny. A dazed Johnny flies through the air and solemnly recites a haiku before smashing into a wall. Gonzalez' singing voice can still be heard from where Nu and Mamo are.

In the morning, Gonzalez is still singing, but runs out of power and falls to the ground. A group of people is seen watching in the background, including Crono and Lucca. The credits show Nu and Mamo parodying scenes from the game.