From Chrono Wiki, a database for the Chrono series that anyone can edit
(Redirected from SNES)
Jump to navigation Jump to search

The Super Nintendo Entertainment System, also known as Super Nintendo, Super NES, or SNES, was a 16-bit video game console released by Nintendo in 1990. In Japan and South-East Asia, the equivalent was known as the Super Famicom (aka SFC).

The SNES is Nintendo's second home console, following the Nintendo Entertainment System. Whereas the earlier system had struggled in the PAL region and large parts of Asia, the SNES proved to be a global success, albeit one that could not match its predecessor's popularity in Southeast Asia and North America—due in part to increased competition from Sega's Mega Drive console (released in North America as the Genesis. Despite its relatively late start, the Super Nintendo Entertainment System became the best-selling console of the 16-bit era.

Controlling the on-screen characters is achieved through the use of a hand-held device known simply as a "controller", which plugs into the front of the console via a long, thin cord. Controllers for the SNES originated as gray in color with light purple and dark purple buttons. The colors varied as new versions of the console reached the market. After the production of the Game Cube made emulation of Super Nintendo video games possible, a new controller that matched the port holes on the new console was created. These controllers were purple in color with red, green, and yellow buttons similar to the original Game Cube controller. 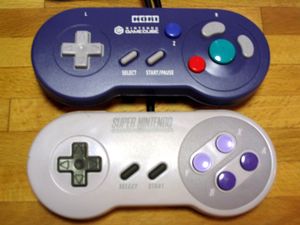 Both controllers allow control of an on-screen character's movement via the D-Pad (Directional Pad) on the left side of the controller, which is shaped like a cross, with each direction corresponding with the proper compass direction. (Up, Down, Left, and Right). On the right side, four buttons are featured in a rhomboidal pattern. From the top left to the bottom right, the keys are Y, X, B, and A. Y and X are light purple and A and B are dark purple. A Start and Select button are featured in the center of the controller, and an L and R button on the top rim near where the cord connects to the controller.

The functions of the button vary between games. However, universally, the Start Button pauses games, allows entrance into specific maintenance menus, or helps progress dialogue. Select, although mostly unused, sometimes assists with restarting the game emulation if pressed in conjunction with Start. The A button typically allows the progression of dialogue, menus, and other generally choosing options. In Chrono Trigger, the B-button allows the player to dash or allow the character to run faster.

An Emulator is a program that allows console video games to be played on Personal Computers. The name emulator literally refers to the fact that the console's video game playing behavior is emulated. Super Nintendo Emulators, such as Snes9x and ZNES, allow games such as Chrono Trigger and Radical Dreamers: Nusumenai Hōseki to be playable on computers. Generally illegal, as the games played upon them are illegally acquired copies, use of emulation is permissible when one owns original copies of the games played on them and has no reasonable way to play the game on the original console, or wishes to emulate the game to receive screenshots. Legal specifics regarding Video game console emulators differs with each project, and the Terms of Use for each emulator is also detailed by the creators.

Chrono Trigger: Crimson Echoes was designed exclusively for the emulator ZNES. As a fan-made game, the only way to play it is through emulation.

Other Square Titles for the Super Nintendo[edit | edit source]