From Chrono Wiki, a database for the Chrono series that anyone can edit
(Redirected from Day of Lavos)
Jump to navigation Jump to search

The Apocalypse (世界崩壊, Sekai Hōkai?) —also referred to as the Day of Lavos (ラヴォスの日, Ravosu no Hi?)— occurs in 1999 AD at 1:24 when Lavos is set to destroy the world in Chrono Trigger. Three individuals from other time periods arrive to defeat Lavos, preventing the Apocalypse from occurring. 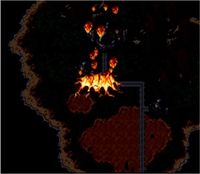 Lavos erupts from underground and sprays explosive spines into the atmosphere, which fall on the entirety of the planet's crust and wipe out almost all of life and human civilization. The planet becomes practically uninhabitable, and humans must rely on what little food they can find to survive, as well as use Enertrons to rejuvenate themselves. Even the landmasses seem to have changed shape.

Many of the robots that "survive" the Apocalypse come under the control of Mother Brain and begin to take over the world.

Three time travelers appear to stop Lavos from destroying the world. They defeat Lavos's crust and then move into its innards to defeat "Inner" Lavos and then the Lavos Core. Thus, the Apocalypse is prevented. 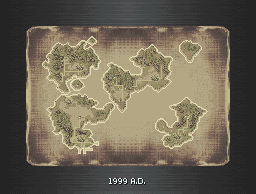 1999 A.D. has a futuristic metropolis appearance. It is similar to Present other than the fact that the cities are in domes, and ruins cover the landmasses.

1999 AD is the only major time period that is not directly available to explore. If the party travels to this time, it is forced to engage Lavos in battle. The party can access Lavos via a book in the End of Time that acts similarly to a regular Time Gate, via the teleporter to the right at the Millennial Fair, via the Epoch, or by defeating Queen Zeal at the end of the Black Omen. If accessed via the Epoch after it has been outfitted with wings, the vehicle crashes into Lavos, entirely avoiding the battle with its shell, but this removes the save point and Time Gate inside Lavos.

Upon reaching access to the Dead Sea, Serge and the party discover a dimensional distortion consisting of various destroyed futuristic cities surrounding a large tower made of fused buildings, all laying with in a sea frozen in time.

It is later revealed that the area is made from the alternate future where Lavos was not stopped from destroying the world and succeeded into causing the Apocalypse.

A unique game over sequence is shown if Lavos defeats the party. The sequence shows Lavos destroying the world, and the perspective then shifts to a lab in which three people, a director, a supervisor and an operator, are witnessing the coming apocalypse. Locations all over the world are indicated with red dots and labels, showing that they have been destroyed. The lab itself begins to crumble; the director commands the other two to leave immediately and stays, being crushed under the building.