From Chrono Wiki, a database for the Chrono series that anyone can edit
(Redirected from Cathedral)
Jump to navigation Jump to search

Manolia Cathedral (マノリア修道院, , Manoria Abbey?) is a location in Chrono Trigger. It appears in the Middle Ages near Guardia Castle as an innocuous cathedral adjacent to a convent. Later, it is revealed to be a hideout for Fiends conducting guerrilla warfare on Guardia Castle. Manolia Cathedral is the first major dungeon.

Manolia Cathedral is identical in color to the buildings in its era, notably Guardia Castle. It has a red shingled roof, a steeple, and walls of light-colored stone. Inside, red carpets with gold floral embroidery line the floors. The walls in the halls are of dark stone. There are many statues of humanoid and gargoyle-like creatures scattered throughout. There are also collapsible staircases that link the main floor to a mezzanine level. Forests surround the enclosure where this cathedral resides and a lake sits peacefully behind. Nearby locations include Guardia Castle, Guardia Forest, Truce, and Truce Canyon. Unlike the trip to Guardia Castle, the player does not need to travel through a separate module to access this building; it can be accessed directly through the World Map.

After following Marle to the Middle Ages, Crono learns she is mistaken for her ancestor, Queen Leene. Because of this, the search party sent to rescue the real queen is called off, leading to her possible death and therefore Marle cannot be born in the present era. Crono decides to rescue the Queen to correct the timeline and resurrect his friend with help from Lucca. 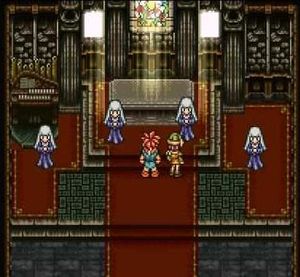 The Nuns prepare to attack

Listening through the wall of the King's Bedroom in Guardia Castle, Crono learns the Chancellor is harboring the missing Queen Leene in a secret room of the cathedral. A maid in the castle also describes the place as not being quite right. With this information, Lucca and Crono search the Cathedral for her. On their arrival, the party encounters several nuns. Nothing appears to be suspicious. However, Lucca quickly discovers a shimmer on the floor near the altar that turns out to be the Queen's coral pin, an object she guards with her life. Immediately after this discovery, the nuns in the Cathedral unveil themselves as Naga. After the player destroys them, another appears, slain immediately by an anthropomorphic frog. The sword-slinging amphibian is guardian to Leene and asks the party to join him in his search for her. Lucca is terrified of the frog at first, but eventually agrees. By playing the organ on the left-hand wall, the party accesses the rest of the cathedral. Battling through the proceeding halls, which are lined with Diablos, Naga-ettes, Bats and other surprises, they discover the Queen and her kidnapper.

The Fiend Yakra, disguised as the Chancellor of Guardia, is in control of the cathedral and its monstrous inhabitants, and holds Queen Leene and the real chancellor captive in a backroom. When Crono, Lucca, and Frog discover this, they defeat Yakra and set the prisoners free.

The cathedral is probably destroyed in the war amassed by Dalton who returns to the main timeline and builds an army in Porre. Or sometime soon thereafter, as its location has been overgrown by Guardia Forest in 1000 AD. It is possible the cathedral could have been destroyed as a result of being tainted by Fiends.

One room in the Cathedral contains a decoy Commander, a decoy Leene, and a decoy Chancellor. When spoke to, they claim Yakra is pleasant company and that there was never a kidnapping. They change into their true forms and attack when the player attempts to exit the room. Along the right wall of that room is a hidden corridor containing several monsters, worshiping a statue of Magus. Beside the statue are two treasure chests. One contains a Guardian Bangle, the other contains a Speed Belt.

V-Jump Presentation (1994) of Chrono Trigger showed Manolia Castle existing in the Present. Like the other buildings in that era, the shingles of the roof changed from red to blue. The forest barrier surrounding the structure was also traded for a treeless plain and moat.