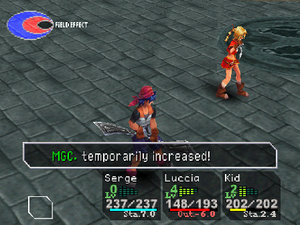 An example of a Buff used on Serge.

A Buff is a Magic spell, Element, or Tech in the Chrono (Series). It temporarily increases a specific statistic for a character, and usually only lasts a few turns. The benefits of Buffs is to improve damage, defense, speed, or hit percent to give them better odds in battle. When a Buff is successfully cast, a caption displays which stat is raised or improved. In Chrono Cross, Elements such as EagleEye and Genius function as Buffs. In Chrono Trigger, Haste is an example of a Buff and increases the number of turns allies and foes have. Debuffs are the opposite of Buffs.

In most scenarios, the effects of Buffs do not stack, but multiple Buffs that increase different stats can be used simultaneously. In both Chrono Cross and Chrono Trigger, buffs influencing the Hit percentage do not augment an ally's chances of successfully stealing items. For example, the techs Pilfer and Snatch used by Kid and Mel, respectively, as well as the dual-tech DoubleTake in Chrono Cross are immune to Hit Buffs. Similarly, while Ayla's Charm tech, and her dual-tech [[Twin Charm] performed with Marle, are un-influenced by Buffs, the Alluring Top accessory can improve the odds of successfully netting a stolen item.

Arguably the best use of Buffs in Chrono Cross is the EagleEye Green Element. When used on characters whose fierce (or third-tier) strikes all foes, such as Guile's Rods or Mel's Boomerangs, the Hit Percent becomes 99% and dishes out large amounts of damage, decimating large parties of enemies quickly. Combine the tactic with the buff Strengthen for added damage. Similarly, combining an Element that changes the field effect to all one color, such as WhiteField, with Genius, and the use of a White Element that strikes all foes, like MeteorShower can decimate entire hoards of monsters. To maximize the damage output, use and Element that matches the Innate of the caster and use an Innate-changing element on the target or targets. Continuing the above example, use MeteorShower with Riddel on an all White field after using TurnBlack on all foes if they are not already Black Innate for massive damage-dealing.