From Chrono Wiki, a database for the Chrono series that anyone can edit
(Redirected from Trap)
Jump to navigation Jump to search 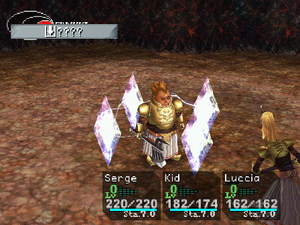 To Trap an Element, the Trap must be placed prior to the foe casting it. When the foe casts the Element in question, it will be captured by the party for use in future battles. Should the foe be defeated before casting the desired Element, the Trap is lost. Any Element which is casted that subsequently gets captured will have its effects completely nullified, making Trap Elements not just useful for acquiring new Elements; but also for strategic use in battle as a way to protect the party from a foe's powerful elemental attacks. The Shaker Brothers provide a demonstration of Traps when encountered in Mount Pyre.

Note also that when using a Trap element, it will add that Element color to the Element field in the upper left corner, just like all other elements.

All traps can be bought in Marbule (Both Worlds), though both world's shops aren't available when first visiting them. It is also possible to find some traps as enemy drops/steals and in treasure chests.

The shop in Another World appears after finishing the initial events in the S.S. Invincible.

The shop in Home World only appears after finishing the optional Save Marbule sidequest.

The following list are elements which have Trap forms, divided by Element.