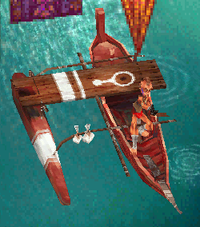 Korcha appears in Termina on his ferry boat to ward tourists away from the Mermaid. After choosing a guide to Viper Manor (Nikki, Guile, or Pierre), the party approaches Korcha, who takes them to Viper Manor for a fee of 100 G. The party arrives in Guldove as a result of the confrontations at Viper Manor. If Serge decides to save Kid, Korcha transports the party back to Termina, otherwise his mother, Macha performs the task.

When the party needs to venture to Home World's Water Dragon Isle for the Ice Breath, they fisherman of Arni can take them to the island on a boat.

Korcha's boat first falls under the party's control after Kid is restored with the Hydra Humour. He only relinquishes the boat if Kid agrees to go on a date with him.

Norris hands over his boat in Another World, after traveling to Termina with him in the party.

When the Terra Tower rises from the sea and into the air, the group needs find a means for flight to access the tower. An anti-gravity device can be salvaged from Starky's ship at the bottom of El Nido Triangle, granting the ship the ability to fly.