The following is a list of all the Featured Article on the Chrono Wiki. A featured article is displayed on the front page of the Wiki from the first of the month till the first of the next month. Articles are chosen if they are well written and have plenty of information. Ideally, the profile must not contain redlinks, redirects, missing images, shown incomplete or have any empty sections and coding errors. This is basically to show the best this wiki has to offer. Voting for Featured Articles may be found here.

Zeypher is in charge of the featured articles, and any questions about them should be directed at him.

Medalsome (バッジスパーク, , Bajji supāku, lit. Spark Badge?) is a tech used in Chrono Cross. Learned by Pierre after acquiring three boss stars, Medalsome restores 25% of his health instantly. Pierre must equip the Hero's Medal to perform Medalsome. When combined with the Hero's Blade and Hero's Shield, Medalsome increases all of Pierre's stats and decreases magic damage inflicted on him by 25%. (more...)

Chrono Resurrection (also known as Chrono Trigger: Resurrection) is an unreleased, non-profit fangame developed by North American team Resurrection Games under Nathan Lazur's direction. It is based on Chrono Trigger by Square. The project was initially called CT64 and was meant to be a complete remake of the original game for the Nintendo 64, with both 2D and 3D playing modes.

After a first interruption in development, the project was redefined as a short interactive demo for Windows-based personal computers. New team members, including professional artists and designers, were recruited for the demo (more...)

The SandSquirt is an enemy fought in Chrono Cross.

These miniature water dragons have scales of varying shades of blue covering their bodies, alongside a pair of stubby arms and a pair of large reptilian legs. Wearing a constant goofy smile on their faces, SandSquirts can be found accompanying Beach Bums, Komodo Pups and Opah Fishes in Lizard Rock. They can be trapped in the Forget-Me-Not Pot and added to the pool of Doppelgangs performed by Sprigg. (more...)

The Moonlight Parade is an event in Chrono Trigger.

Every one thousand years, at the close of the Millennial Fair, the citizens of Guardia parade Leene Square to celebrate the millennial birth of their nation. "Moonlight" in the title, refers to the time of day at which this event occurs. When held, several dancers course the square with their colored scarves. Lights festoon across the fences, awnings, booths, and stalls as the citizen dance, laugh, and entertain themselves. (more...) 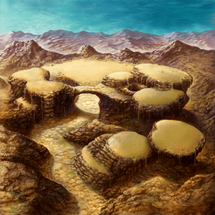 Earth Dragon Isle is a sandy, cavernous island created by FATE to house the Earth Dragon in Chrono Cross.

Consisting of dunes and rocky outcroppings on the surface, below it housed caves and streams of pouring sand; these runlets reemerged in quick dashes called sand boils. Access to the lower area was allowed only through descending through a large curtain of quicksand that served as the cave's center ceiling. The lowermost chamber existed to a huge cavern where the Earth Dragon resided; it included a bulky outcropping above and opposite the entrance. (more...) 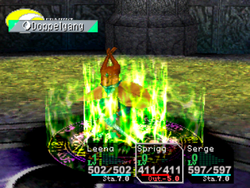 Doppelgang is a Green Tech used in Chrono Cross. Once Sprigg is recruited in the Temporal Vortex, she automatically joins outfitted with this Tech. Throughout her travels, she can collect enemies in the Forget-Me-Not Pot, at which point, they are added to a collection or pool. Any character can trap enemies to be used for Doppelgang, so long as they have the Pot equipped as an accessory.

This tech allows Sprigg to transform into one of those previously collected enemies, mimicking their stats, their Elements, their strengths, and their weaknesses. Most enemies are trappable, ranging from Acacia PVT to YellowBelly. Even Ozzie, Flea, and Slash can be Doppelganged, after being captured in the Bend of Time, in a New Game Plus game save. (more...)

Melchior, known in Japan as Bosch (ボッシュ, Bosshu?), also known as the Guru of Life, is one of the three Gurus that lived during the Antiquity. In Chrono Trigger, Melchior is one of the three Gurus of Zeal in the Antiquity. He is known as the "Guru of Life". When the Mammon Machine was activated, it began absorbing too much power. Queen Zeal and Schala along with the three Gurus were the only ones at the Mammon Machine's activation. The Gurus warned about of a dimensional vortex, a power humans cannot control, and they would be dragged into a rift in time, yet the Queen persisted in activating the machine. Soon, Janus entered the room for Schala. Suddenly, the six were transported in front of Lavos. Gates then appeared and transported Belthasar, Gaspar, Melchior, and Janus to different times. Belthasar was sent to the Future, Gaspar was sent to the End of Time, Melchior was sent to the Present, and Janus was sent to the Middle Ages. (more...)
Recently featured: Serge - Fiendlord's Keep - FATE - Radical Dreamer - Zoah
See all Featured Articles - Vote for Featured Articles

Serge (セルジュ, Serge) is the lead protagonist of Chrono Cross. He, just like Crono, is a silent protagonist. Serge's existence is a contradiction between the dimensions the basis for much of the philosophical discourse in Chrono Cross. Born to Marge and Wazuki of the fishing village of Arni in the El Nido Archipelago, Serge had a storied history with the world since before he knew how to write. At the tender age of three years old, he came into contact with the Frozen Flame as a result of his father Wazuki's desperation to heal his son after he had been mauled by a panther demon. The contact healed him and designated him as its Arbiter, or controller; this caused the Frozen Flame to be unusable by the supercomputer FATE due to the Prometheus Circuit. Due to its obviously advanced technology, it had no problem binding both Miguel, a friend of Serge's father, and eventually Wazuki himself into cruel servitude. For the time being, however, Serge escaped unharmed with Wazuki, who was only mildly corrupted by the computer. Back in Arni, Serge became good friends with Leena, Miguel's daughter, and the other inhabitants of the village, who took interest in watching him grow. Forces beyond his control would soon threaten his life again, however.

The Fiendlord's Keep (also known as Magus' Castle in the SNES/PS version) is a location in Chrono Trigger that appears in 600 AD. It is Magus' castle and, according to legend, is home to 100 monsters.

After both wings have been completed, returning to the main hall will reveal a secret entrance to a third, central wing, hidden behind an illusion. This third wing is filled with traps of Ozzie's devising. After passing all of his traps, you will come face to face with the general. Defeating him is trivial, as you can use his traps against him and drop him into the basement through a trap door. This opens the way to a stair that descends into the catacombs beneath the keep, leading to Magus' sanctum. (more...)

FATE is a supercomputer which was created by Belthasar made from Robo in the distant future. Based on the old Mother Brain circuit boards, FATE is self-aware and can operate alone. Referred to as the Goddess of Fate by the people of El Nido, FATE operates as an unseen villain until late in the game.

In Chrono Trigger, FATE's original form was of the holographic artificially intelligent Mother Brain, which governed the future's robot population. Because the Day of Lavos will no longer occur (following the first game), this event is erased from existence.

Following the Time Crash, FATE would not risk discovery of Chronopolis or the Frozen Flame by populations of the past, which could compromise her creation in the future. It took every measure to prevent this, sealing off the Sea of Eden. FATE created the islands comprising El Nido through...(more...)