Zombor is a boss in Chrono Trigger. It appears on Zenan Bridge in the Middle Ages. Ozzie uses sorcerer magic (or some other magic) to combine corpses into Zombor. In the PlayStation release of Chrono Trigger, the battle against Zombor is depicted in a Full Motion Video. During the video, Frog and Crono team up to cast X-Strike on it, while Lucca shoots the Upper portion with her gun. Ironically, Frog is not an accessible party member at this part in the game. 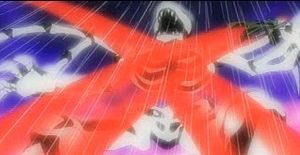 X-Strike performed on Zombor in the FMV of the PlayStation release.

Because Zombor's Upper Body is weak to Ice and Zombor's Lower Body is weak to Fire, it's best to include Lucca and Marle in the party for this battle. Learning the Double Techs Ice Sword and Fire Sword help greatly in this battle, but if the play has not leveled up enough to learn these Techs, the traditional Ice and Fire Magic spells will suffice. Defeating the Lower Body first is advised because the Upper Body steals all the MP from the character who defeats it, using MP Buster. Throughout the battle, the Upper portion of Zombor casts Flame Strike, which damages one party member for moderate damage, and Annihilation Ray, which strikes all party members for moderate damage, as a counter attack. Zombor's Lower section casts Earthquake, which can prove quite lethal to the party, lending another reason why the Lower Body should be defeated first. Alternate between attacking the Upper and Lower sections, using both Fire Sword and Ice Sword. If these Techs haven't been learned, attack the respective parts with their respective weaknesses and have Crono use Cyclone to damage both parts of the skeleton or use him to restore Hit Points or Magic Points whenever needed. The Upper portion of the skeleton absorbs Light Magic, i.e. anything cast by Crono, so using Lightning and Wind Slash are inadvisable; it also absorbs Fire Magic. The Bottom portion absorbs Ice, Water, and Shadow Magic, making specific techs performed by Robo and Marle, ineffective.

When the players fight Lavos, Lavos becomes the strength of some of the bosses you faced in the past. One of them is the Zombor. The incarnation appears in two parts, similar to the original monsters, and performs many of the same techs as the original. The creature blocks Lavos' eye, forcing the party to destroy it before being able to strike at Lavos.