Dragoon Gauntlet (龍騎士のこて, ryūkishi no kote?) is an accessory in Chrono Cross. It can be equipped by all characters, and increases attack power by 3 points when worn.

It can first be acquired from the chest in Karsh's room when invading Viper Manor (Another World). Examine the chest in his room 20 times, and Karsh will let Serge and party have this accessory. Note that if you miss your initial chance to get this accessory here, you can still retrieve it later by revisiting Viper Manor post-infiltration mission (after the events at Guldove) and simply opening the chest - since Karsh is no longer present to scold you, it can just be opened by checking it once like any other chest, and does not require checking it 20 times. 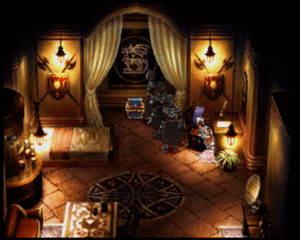 Examine this chest 20 times, and Karsh, exhausted from Serge's persistance, will let him open this chest
Retrieved from "https://www.chronowiki.org/w/index.php?title=Dragoon_Gauntlet&oldid=49403"
Categories: